The power from northern Morris County, state Sen. Tony Bucco (R-Boonton) wants another term for himself, wants his legacy perpetuated by his son, and doesn’t mind if Assemblyman Michael Patrick Carroll (R-Morris Twp.) props the harder core conservative portion of the district as an independent GOP team member.

After crushing his opponents in 2009 as the would-be third man shivering on the outskirts of the party establishment, then getting talked by Gov. Chris Christie into supporting last year’s budget, Carroll Monday night joined the Buccos at the Boonton Elks Lodge as the three Republicans formally kicked off their re-election bids in the 25th Legislative District.

Sen. Bucco, his son, Assemblyman Anthony M. Bucco (R-Boonton), and Carroll boast the backing of nearly 300 county and local elected officials, including Republican leaders from every municipality across the overwhelmingly Republican district.

“There’s only one way to get this state back on the right track, and that’s by reducing the massive amount of spending in Trenton which has left us as one of the most indebted states in the nation, with a credit rating downgraded just last week to reflect how serious our future fiscal challenges are,” said the elder Bucco, the GOP budget officer who was first elected to the state Senate in 1997.

“That’s why it’s so important to have strong leaders who will address these problems responsibly by cutting what we can’t afford,” he added. “We pledge to continue fighting for taxpayers every way possible, through additional pension and benefit reforms, cutting unnecessary spending wherever we find it, allowing businesses to grow and ensuring we leave a bright future for our kids and grandkids.”

As he attempts to build on the GOP’s dismal 16-man minority, state Senate Minority Leader Tom Kean Jr. (R-Westfield) issued his formal support for the senior, bankable Bucco in particular.

“Tony has been a long-time friend and ally to me in the Senate,” Kean said. “As a veteran legislator and as Budget Officer, his leadership has been vital in Republican efforts to bring change to Trenton; championing last year’s budget which for the first time in a decade didn’t raise taxes or borrow money.  Tony deserves our full support and with your help, together we will be able to regain the majority and bring conservative, long-lasting change to Trenton.”

Primary opponents of the younger Bucco in 2009 complained that the family name forged by the senator won that race. Now, both the older and younger Bucco are on the ballot together for the first time.

“This year, it will be an honor to run on the same ticket as my father who has always been a tough campaigner,” said the assemblyman.

Barring a serious primary contender, a massive redistricting upset or a meltdown, they might not have to do any tough campaigning where Bucco – $57,379 in the bank – regularly demolishes “opponents.” The district breakdown: 41,758 R’s, 30,451 D’s, and 49,758 R-leaning independents.

“We’ve exchanged ideas, sponsored legislation, pushed each other to work harder, and have not been shy when it comes to our disagreements on policy,” said Assemblyman Bucco.

Whatever those policy differences might have been between the two Buccos, they never – it goes without saying – sparked headlines. 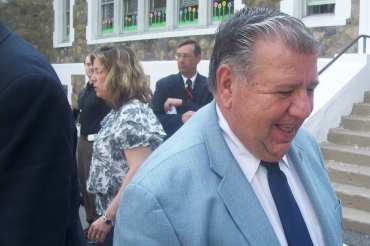