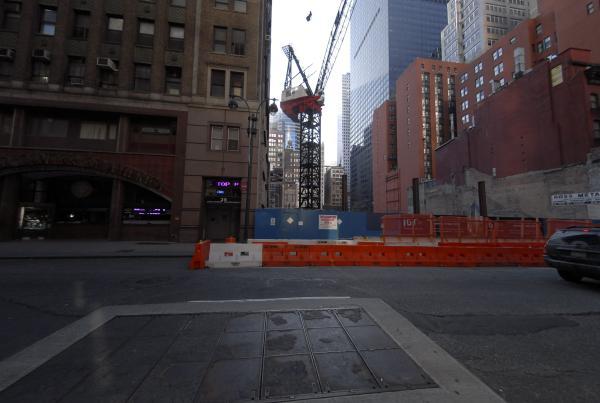 Gary Barnett has vowed that in 2011, the International Gem Tower’s 11,000 tons of structural steel will finally go vertical. The city approved the project in 2006, but like so many nascent developments of that era, it’s had trouble getting off the ground. The planned tower will cost $700 million and reportedly encompass 748,000 square feet. Proponents say it will preserve New York’s status as the center of 90 percent of the international diamond trade. The previous building was demolished in 2007, and work on the first construction phase began in May 2009. Eighteen months later, not much has happened—at least to the naked eye—but the tower has been declared a foreign trade zone by the federal government, and the state and the city have put forth $49.6 million in tax breaks tied to drawing new businesses. Tishman Construction is in charge of managing construction of the building, which will feature a facade of embedded diamond-shaped steel medallions and come equipped with a maximum-security vault, underground parking, a private club and a museum. 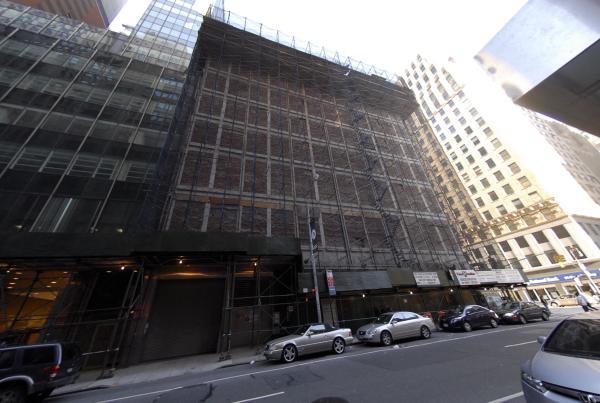 The planned 400,000-square-foot project will take up an entire block and is being developed by South Carolina–based chemical manufacturer Pacolet Milliken. For months, the former site of the Milliken Building has been a pile of dirt, but recently Hines Interests has agreed to lend a hand, bringing with them architects Pei Cobb Freed to design the building, which seems likely to have an office component since CB Richard Ellis’ Paul Amrich is rumored to be the broker. The developer declined to comment on the status of the project or provide the name of the construction company, but since the beginning of the year, no major construction permits have been issued for the building, according to the Department of Buildings’ Web site. Nonetheless, the project is “potentially positioned to be at the leading edge of the next development cycle,” according to a press release, which suggests now might be just the right time. 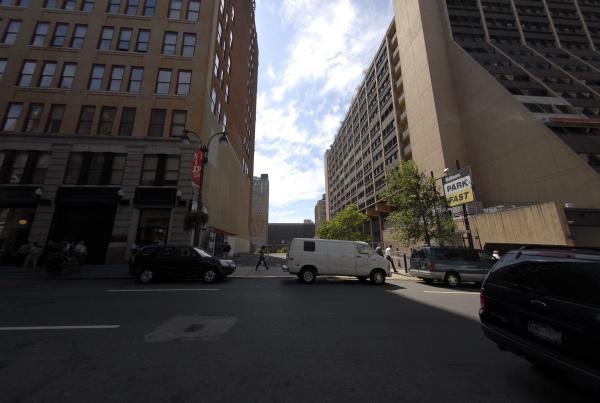 Brookfield’s new, primarily office development will be, as a spokeswoman succinctly put it, “ginormous.” Officially, the address of the new 5.4 million–square–foot development is 400 West 33rd Street, but, in fact, it will consist of two towers encompassing 5 acres from 33rd to 31st streets and from Ninth to Dyer avenues. While far West 34th Street currently resembles a modern-day seaport, filled with sketchy bars, bad fast food and clueless tourists, the spokeswoman said it will be the “new cool spot.” Given that four of the 10 developments on this list are in midtown west, she just might be right. The developer hasn’t announced who will manage the construction because they want to achieve certain leasing hurdles first. 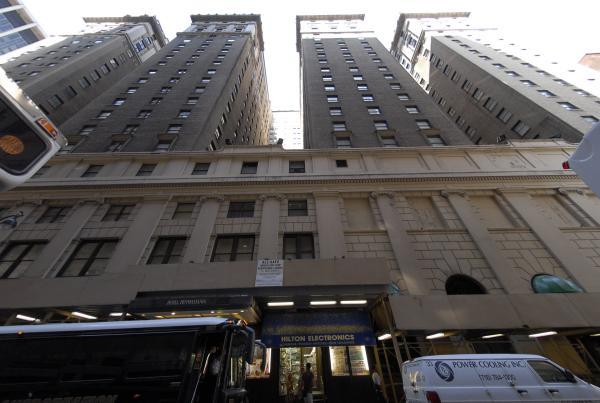 A couple of blocks east of Brookfield’s sprawling development, Vornado Realty Trust hopes to erect a tower so impressive that it has caused even the iconic Empire State Building to pull back its shoulders. The 2.8 million–square–foot office tower will be 1,200 feet tall, making it the city’s third-tallest building. But Anthony Malkin, whose firm W&H Properties controls the Empire State Building, wrote a letter to the City Planning Commission last summer, raising concerns about the likely effect on his emperor of the skyline. Most recently, concerns even surfaced in The Real Deal that the Vornado tower could disrupt its neighbor’s radio signals. The project received government approval in August, and there have been a smattering of minor permits issued at the would-be site, which would supplant the aged Hotel Pennsylvania. Vornado said no decision has been made about who will manage the construction.
Advertisement 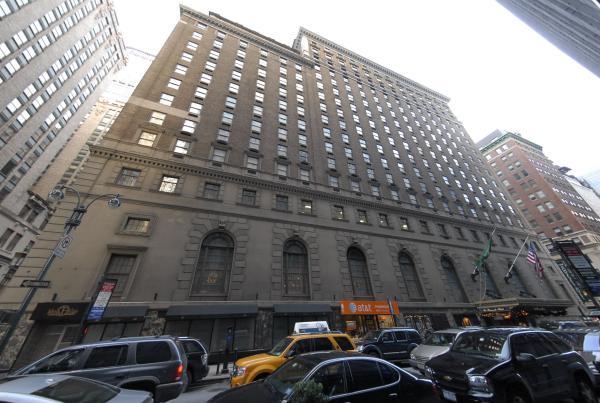 Truly prime development sites in New York City no longer exist, with the sole exception of the Roosevelt Hotel. As The New York Observer wrote in 2007, the owners are “sitting on a veritable gold mine: a whole 1-acre block with a fancy Madison Avenue location, rising right around the corner from Grand Central Station.” But in the backward logic of development, the more fantastic the potential, the more likely the project will be stymied by years of infighting. So it has been with the Pakistan Airlines project, which the owner had put up for sale in 2007, followed by rumors of a $1 billion sale. The site has been off the market since February 2008, according to Cassidy Turley, and the airline periodically puts out news releases affirming it has no plans to sell. 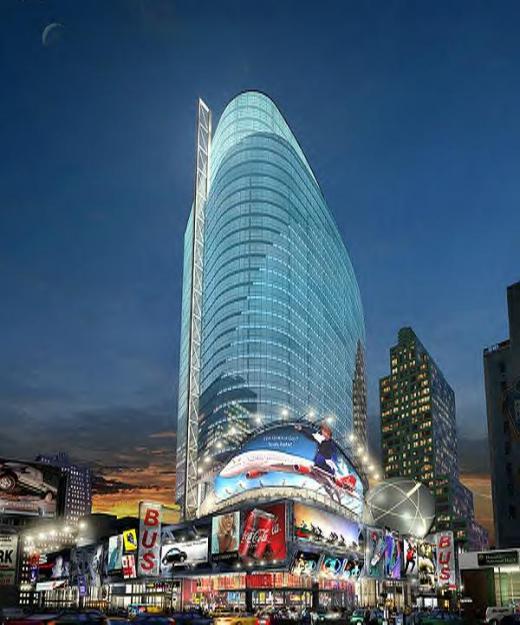 It’s difficult to imagine a less desirable downstairs neighbor than the Port Authority Bus Terminal, but that certainly hasn’t stood in the way of a flurry of development in the area. Following the New York Times building at 40th Street and Eighth Avenue, and 11 Times Square, 20 Times Square will rise above the north wing of the concrete transport hub. Law firm Paul Weiss was apparently in negotiations to become the future building’s anchor tenant in 2008, but no deal was ultimately struck. The building is 100 percent available as of January 2011, according to Cassidy Turley. Last month, the Port Authority released the three finalists’ renderings for renovations to the bus terminal and the 1.3 million–square–foot tower that will rise atop it. Vornado, the tower’s developer, said no decision has been made about who will manage the construction. 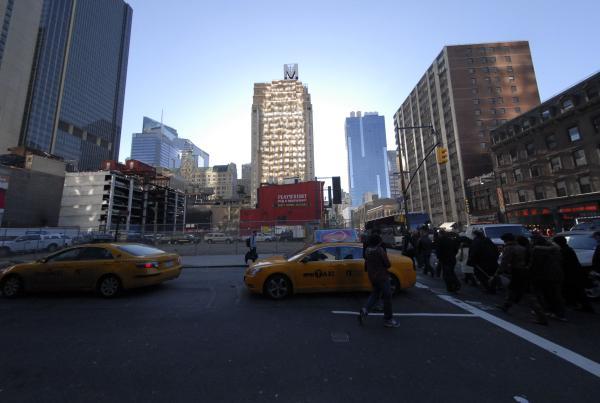 During one of the bleakest months in recent memory, November 2008, Mort Zuckerman and Stephen Ross moved forward with plans to build a tower between 45th and 46th streets to rival nearby 11 Times Square. They bought up six property owners at a reported price of $350 million. More than two years and a number of delays later, assemblage is complete, according to Cassidy Turley. A spokeswoman for Mr. Ross’ Related Companies said no further information was available.
Advertisement 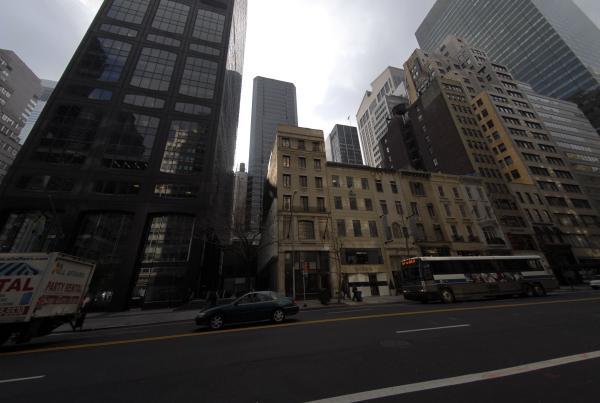 Harry Macklowe fought unusually long and hard to hold on to the former Drake Hotel site, but like with most of his assets, it was ultimately doomed. It’s not difficult to see why Mr. Macklowe was so reluctant to relinquish his Park Avenue gem: It features a swanky history, a prime office location and one of the city’s most desirable retail fronts. Mr. Macklowe bought the hotel in 2006 and demolished it, before defaulting two years later on a $513 million loan that would have allowed him to build on the site. Last year, the troubled owner finally relented and sold the site to the California-based investment firm the CIM Group for $305.4 million, according to city records. A few weeks ago, The Real Deal reported that the new owner had bought up an adjacent townhouse on Park Avenue, suggesting plans to build have finally begun inching ahead. It’s 100 percent available as of January 2011, according to Cassidy Turley. 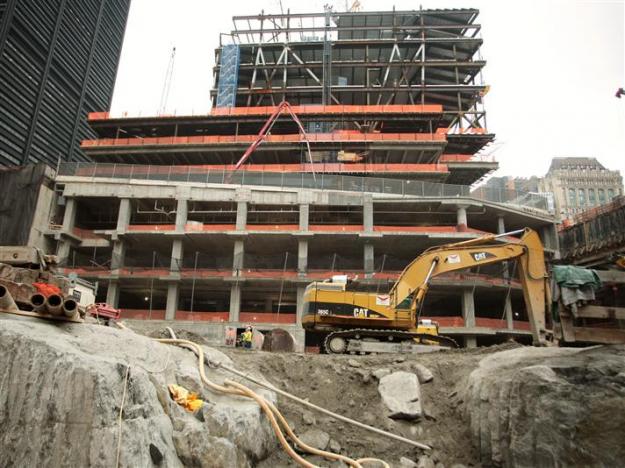 Arguably too many people have too high hopes pinned on the World Trade Center rebuilding for it ever to be considered a success. The only commercial development in Manhattan that’s currently in full throttle, the World Trade Center site is at once a harbinger of New York’s recovery from 9/11 and a crushing recession, as well as a symbol of downtown revitalization and, of course, freedom. In reality, disputes over the design as well as problems obtaining financing last decade spawned copious pessimism over whether construction would even ever start. But, behold! Of four buildings that were planned for the site, two are going up and two are in the foundation stages. Four WTC is expected to open first. Like three of the four developments on the site, it’s being developed by Silverstein Properties. They’ve picked out the Italian marble for the lobby, so we suppose that’s something, and the Port Authority is expected to lease 600,000 square feet of the 2.2 million–square–foot tower. Silverstein’s David Worsley is overseeing the construction of Four, Two and Three WTC. One World Trade Center, being developed by the Port Authority, is the furthest along. A spokesman for the Durst Organization, a stakeholder in the project, said it will be finished by 2013. The owner has struggled to fill the tower, even with Condé Nast claiming nearly a third of it. Chinese firm Vantone closed a deal for a small chunk, and we’re eagerly awaiting the results of Douglas Durst’s recent jaunt to China to lure more tenants. Tishman Construction, which is managing the project, declined to comment. Meanwhile, Two WTC, a crystalline, 79-story tower that will be the second tallest in the city, has inspired the highest hopes and the greatest frustration. As of December 2010, foundation work was well under way, but the dramatic vertical progress that many crave has yet to begin. No leases have been signed. Foundation work began at Three World Trade Center this summer, and it’s scheduled for completion in 2014. The 54-story tower includes 2.5 million square feet of office space and five trading floors, but no leases have been signed. 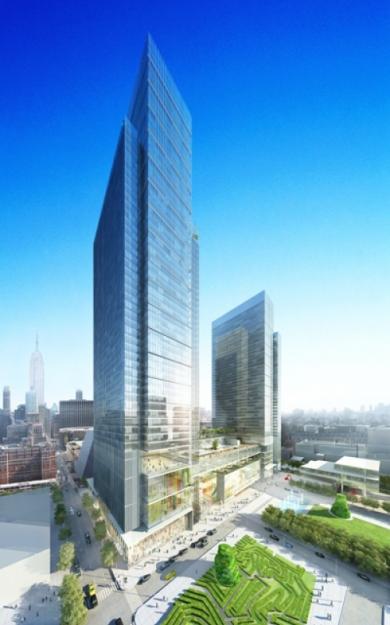 The ambitious Related Companies–led development on the far West Side has been slowed by recession-era caution. The developer is leasing the spot from the M.T.A. for 99 years for roughly $1 billion. The entire 12 million–square–foot mega-development, if built out fully, would run an estimated $15 billion, including 13 million square feet of commercial and residential space consisting of 5,000 residential units, a retail complex, a five-star hotel and a 750-seat public school. The development must have a certain critical mass of tenants to get going: The platforms alone for the two 13-acre rail yards are estimated to cost up to $1 billion, meaning a promised set of occupants is needed to get financing. The developer began preparatory work in December on the 26-acre mixed-use development project, in which the first buildings will be completed no earlier than 2015. Tishman is managing construction, which could begin in 2012.
Advertisement 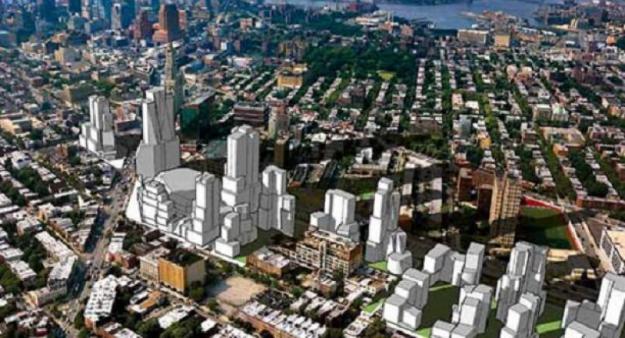 From where we sit now, it looks like Atlantic Yards might never get built. The hurdles seem insurmountable for developer Forest City Ratner to build a basketball arena, 6,400 units in residential development, office space and a retail center (that could include an Apple store, if rumors prove true) in the heart of underdeveloped downtown Brooklyn when financing for ground-up projects is all but frozen. But one could have been equally skeptical about the developer’s New York Times building on Eighth Avenue, a gleaming office tower for a not particularly wealthy media company across from the city’s least appealing landmark, the Port Authority Bus Terminal. But as this very list demonstrates, the completed building has almost single-handedly turned midtown west into a development hot zone. At a New York Commercial Real Estate Women event in the fall, top Forest City Ratner executive MaryAnne Gilmartin talked about a nail-biting eleventh-hour closing and a plan to give green cards to foreigners who invest more than $500,000 in the project. But she also expressed confidence that the development will transform Atlantic Avenue into a commercial hot spot befitting what would be, if it stood alone, the country’s fifth-largest city. Construction details have trickled out, though much remains a mystery. Hunt Construction Group is building the arena component, and local architect firm SHoP was picked recently to design the first apartment tower. 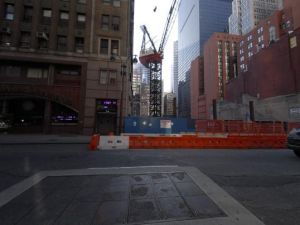 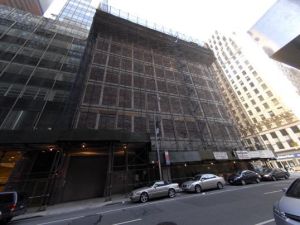 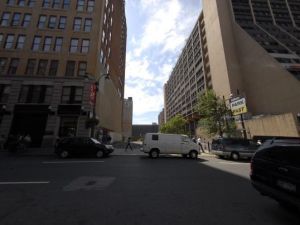 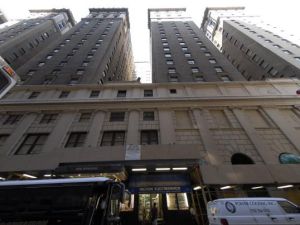 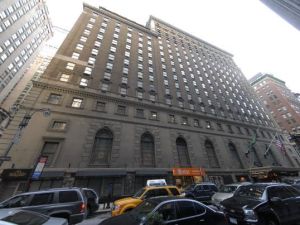 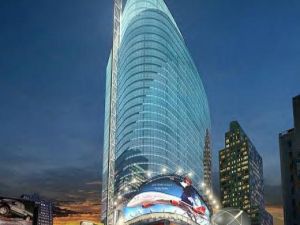 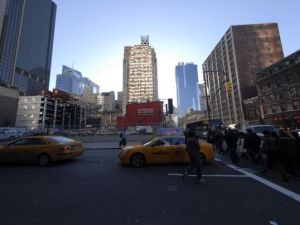 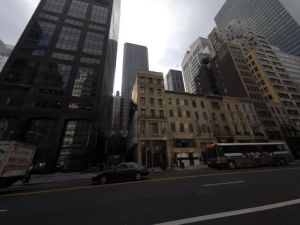 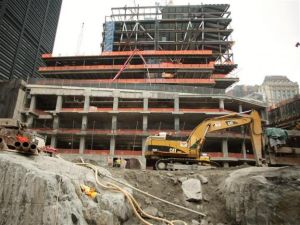 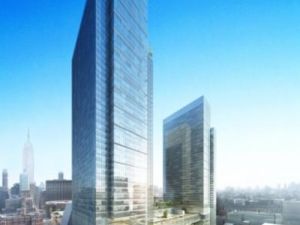 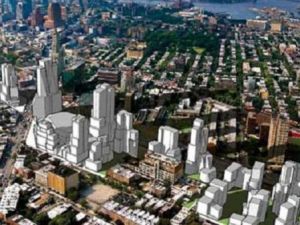