The governor introduced a $29.4 billion budget this afternoon in what the administration has dubbed the “new normal” of state budgeting.

The budget will increase aid to schools by $249.3 million while keeping aid to municipalities and higher education flat from the fiscal 2011 spending plan. The budget also calls for the potential of a $506 million  pension fund payment, required by law in 2012, to be made in the current fiscal year.

In his address, Christie asked the Democratic leadership to make good on the promise of passing meaningful pension reforms by the middle of next month.

“And as I am asking the Democratic Leadership to make good on their promise, I am offering a powerful incentive to sweeten the pot,” Christie said. “If you pass real reform, along Senator Sweeney’s timetable, I will make a $500 million payment to the pension fund immediately, not wait until sometime in Fiscal Year 2012, which is all that the law we passed last year requires. This would be the first payment made since fiscal year 2009, by anyone, Democrat or Republican. Let’s not wait – real reform on Senator Sweeney’s timetable – real money into the pension fund immediately.”

The budget calls for a $189 million increase in the state’s Homestead Benefit Program, bringing the total to $458 million, which will be allocated over four quarters.  But that money is tied to passage of Christie’s public employee health care reform, which the administration says will save $323 million in fiscal year 2012.

If the legislature fails to enact the proposal, Christie Chief of Staff Rich Bagger told reporters in a pre-address briefing that the Homestead benefits increase would be in jeopardy.  Asked if additional school aid is tied to health care reform, Bagger said the school aid would likely remain intact, however the administration would still need to come up with $134 million in savings to offset the failed proposal.

In his address, Christie laid the future of tax relief at the doorstep of the Democratic-controlled legislature.

“But let me be clear: the chance for middle class taxpayers and seniors to receive double the property tax relief without raising taxes on anyone else is solely up to you, the Legislature,” Christie said. “The ability to provide doubled property tax rebates involves a tradeoff and requires real reform to pay for it. I have advocated health benefit reform, and earlier this month the Senate President laid out his proposal, and I applaud his courage for doing so. We are in a position to make progress.”

Amoing the funding increases called for in the plan are an additional $20 million in hospital aid, which includes a $10 million increase in charity care.

Medicaid reimbursement still faces a $1.3 billion gap in the plan, which will be partially offset  by pushing recipients into a managed care program.  In addition, the state is filing a federal waiver that would fill part of the gap.

In keeping with the governor’s focus on drawing business to the state, the budget calls for nearly $200 million in business tax reforms.  Among the measures proposed are a phase-out of the Transitional Energy Facility Assessments, which the administration says will save business $62 million in the first year and $245 million in the 5th year.

The governor also plans to double the tax credits for research and development, bringing the credit to 100 percent.  The move would save businesses $33 million in the first year, according to administration figures.

The plan would also change the gross income tax structure, saving businesses $23 million in the coming year.  In total, the administration projects a savings to businesses of $690 million by fiscal year 2016.

“A few of the tax provisions are similar to those approved by the legislature. As I have said before, I agree with some of what was in that package. But we cannot have tax cuts that we do not pay for,” Christie said. “Creating jobs is the top priority of this Administration, which is why tax cuts that help businesses grow and expand are a priority in the budget.”

The budgets of most state departments would drop, with the exception of Treasury and Transportation, which both increase over 10 percent.  The state DOT increase is a result of the “pay as you go” portion of the governor’s transportation capital program, while the increase in the Treasury department comes from the additional Homestead Benefit Program credit.

The spending plan calls for an increase of  $27.3 million in tuition aid grants for full and part time students while keeping higher education stable.

Among the cuts included in the budget are a reduction in the property tax freeze granted to senior and disabled citizens and a nearly $2 million decrease in veteran’s tax deductions.

The budget includes no layoffs, but recognizes a reduction in staff of about 200 employees achieved through attrition.

The administration is predicting a modest increase in revenue over the current year, with the state’s intake rising to $29.374 billion from $28.262 billion in 2011.  The budget also would reduce the state’s reliance on “one-shot revenues,” which include federal stimulus money and debt restructuring, to 2 percent of the overall budget, down from 6 percent in fiscal 2011 and 13 percent in fiscal 2010.

In his address, Christie stressed that the budg et represents the so-called “new normal” of state budgeting, meaning that it uses last year’s plan as a base instead of the traditional baseline of full funding for all programs.

“Every year, the Office of Legislative Services puts out a projected deficit. The only problem is that this number assumes no one is actually managing the budget or setting priorities,” Christie said. “That is yesterday’s New Jersey. The old projection is a result of the old way of budgeting… assuming you cannot control the budget and guide it to a more sustainable place, but instead must just let it take its own course. To run away from hard choices, just because they are hard.  To put the government on autopilot, with no strong leadership setting priorities. No more.  For too many years, our government has operated under the belief that the baseline – the place you begin – is to continue to fund every program in the budget: regardless of the fiscal climate, regardless of the economy, and regardless of the effectiveness of the program.  Not anymore.”

The budget received mixed reviews with publlic sector employees decrying it as anti-middle class and business lauding the cuts aimed in their direction.  Democratic lawmakers criticized the plan, but many seemed caught off guard by some of the proposals and preferred to digest the budget before taking aim at the governor.

The governor needs the votes from Democratic legislators in both houses to shepherd his budget into law, so it is likely the next four months will be packed with negotiation and compromise. 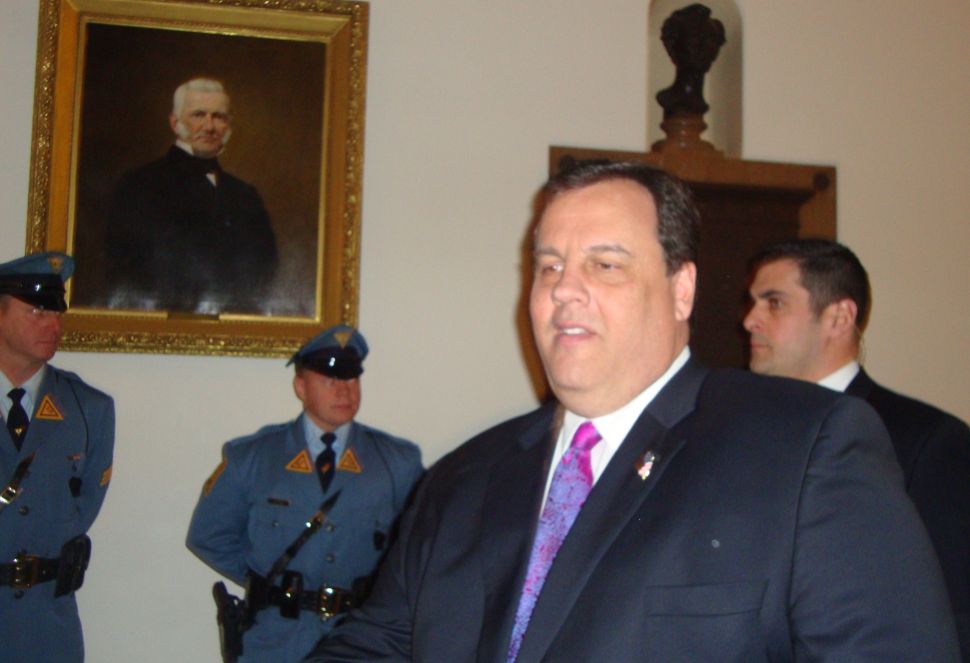