When the banquet room was full and someone abruptly cut the Dean Martin soundtrack, Gov. Chris Christie had arrived.

The governor’s presence indicated his reliance on O’Toole, and Christie said as much when he addressed the eclectic crowd of 750 people. Not only did the Essex County Republican prove his value to the governor during last year’s budget process as the senator helped the governor preserve Republican unity, he also used his skills at reaching across the aisle to assist Christie in building foundational relations with Democrats.

But he’s also a member of the five-person GOP redistricting team that hungrily pursues a Republican legislative map, and that hunger was in the room, more insatiable than anything the heaping tables of Italian delectables could stem for one night in the bellies of political animals.

“Make no mistake,” the governor said. “I like Senate President Steve Sweeney (D-West Deptford) and consider him a friend; I like Assembly Speaker Sheila Oliver (D-East Orange) and consider her a friend, but I think they would both make outstanding minority leaders.

“I like this room when it’s crowded,” Christie added, and it was – very. “If you like what we’re doing now, wait until you see us when we have a majority of 41 in the Assembly and 21 in the Senate.”

No, Brian Stack and DiVincenzo were not in the room, but they may as well have been, according to some Republicans almost jealous of their relationship with the governor at this point.

“What’s the Democratic response to that – to them?” asked one incredulous operative in response to the highly visible and voluble pro-Christie remarks and attitudes exercised by Stack, the Union City mayor and senator, and DiVincenzo, the powerful Essex executive.

After spending most of the day in Washington, D.C., meeting with the New Jersey delegation and speaking at a conservative think tank, Christie materialized suddenly at the front of the room and he and O’Toole were respectively the national star and mechanical underpinnings of the party, projected confidently side by side. 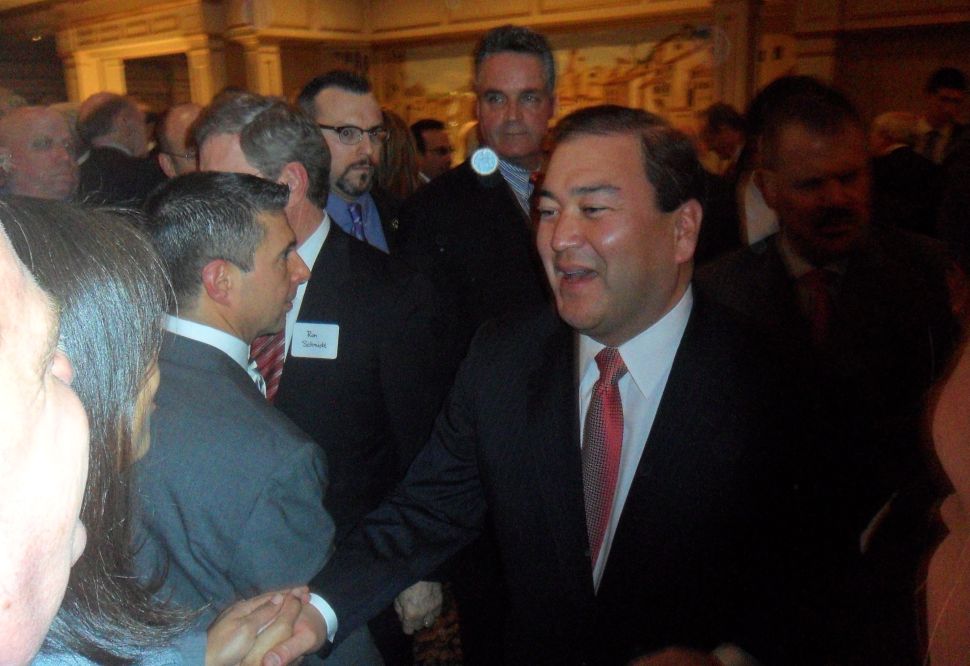