TRENTON – When the biggest transportation project in the country, the ARC tunnel, was canceled last year, its champions called it the most important infrastructure project in a generation, gone.

“A generation turned out to be three months,” Gov. Chris Christie said today at his press conference, following the announcement from U.S. Sens. Frank Lautenberg and Robert Menendez that a new Amtrak rail tunnel project was in the works.

Christie boasted that every point the senators put in their plus column today was a Democratic doppelganger of the Republican governor’s explanation for canceling the ARC tunnel in the first place.

“I’ve said all along I think we need a tunnel. I said at the time that we should try to partner with Amtrak,” the governor explained. He was reticent to fully support the idea, but said he will consider it when he hears details of the state’s involvement.

Christie backhandedly congratulated Menendez and Lautenberg for “pivoting” to find a better solution to the transportation problem: too many commuters, not enough train space heading into Manhattan.

On the New Jersey side of the trans-Hudson tunnel, the Amtrak plan follows fairly closely the footprint of the ARC project, so some of the digging that already began – and some of the engineering studies already conducted for the ARC – may be valuable if the new plan takes off.

“I’m glad I didn’t rush to pay that bill that the (Federal Transportation Authority) sent,” Christie said of the federal up-front ARC funding that was billed to the state when it was canceled.

The right to bear antennae

Christie addressed a recent article on the state’s neglect in funding legislation created years ago subsidizing television cable bills for some of the state’s low-income residents.

“I mean, seriously,” he said when asked about the program. “Has cable TV become a constitutional right now?”

“It was a dumb idea, in my opinion,” he said of the law. “You think the taxpayers of New Jersey know they’re paying for people’s cable TV?”

The set-aside money for the program was used under Gov. Jon Corzine to fill budget gaps before Christie arrived in Trenton, he said.

“He used it to balance his budget. If it was such an urgent matter, don’t you think (they would have funded the program)?”

The program’s outlook in his upcoming budget? Christie said, “I suspect that that may be on the endangered list.”

Christie in the Land of Lincoln

Asked how his Illinois trip to convince newly tax-laden corporations to come to New Jersey went, Christie said, “I had fun in Illinois.”

“We got at least one very solid prospect out of it,” he said.

He pitched a move to the Garden State to some business owners, one of which told the governor afterward, “I’m sold. Where do we go from here?”

“I gave him the lieutenant governor’s cell phone number,” he said. “It makes it all worthwhile,” especially since he paid for the trip out of pocket.

Questioned on why the legislation wasn’t initiated by the GOP, Christie asked the press member, “You think it’s my fault because I didn’t put the bill in?”

He was clear about what needed to be done legislatively, including a civil service opt-out clause for municipalities.

“It’s going to wind up costing the state, not just in the near term but in the long term,” he said of the lack of acceptable reform.

And if there are any “ramifications for fiscal ratings” that the state is stuck with, absent that reform: “They own it,” he said of the Democrats. “I was ready to sign this in the fall.”

“You know the tool kit had 20 bills,” Christie said, created from a list of 33 items the governor recommended addressing. “They passed five.”

“That’s a .250 batting average (for Sweeney),” he said, joking that the Senate president’s average looks more like Christie’s Mets than Sweeney’s Phillies. 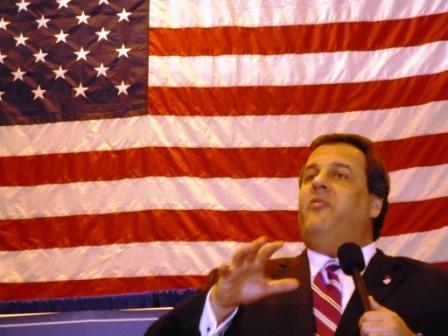