The board has a legal challenge over whether or not the county superintendent approved the five-year contract extension, but in the meantime the Department of Education has called on the board to rescind the contract.

He wouldn’t name any other districts at risk of having their funding snatched up for legally challenging the governor’s cap, although he also pointed out the Chatham Board of Education and Superintendent Jim O’Neill as secondary offenders.

“Parsippany’s the one who’s got the biggest concern right now,” he said. “They’re making their call. They may wind up looking for a heck of a lot more money from the taxpayers of Parsippany.”

Christie doesn’t believe courts are the best arena for the dispute, which he is demonstrating by using the power of state aid to compel compliance.

Since Christie is using state aid as a means to enforce his policy, PolitickerNJ asked the governor if he would conversely dole out state aid to rally support for his policy initiatives. “No, not at all,” he said.

Still money for vouchers, though

After vetoing a stack of bills pushing tax credits and job creation, Christie stood by one of his own tax break policy matters.

The Opportunity Scholarship Act gives school vouchers funded by business tax credits, and Christie said, “I will find a way to pay for it in the budget.”

Wisconsin Gov. Scott Walker is finding tough going in his fight for Statehouse savings in Madison. The legislature is holding out a quorum for a vote on stripping collective bargaining agreements, and the unions are rallying against the unpopular approach.

“I support Gov. Walker,” Christie said today. “I know all about tough choices…I know him and I trust him and I support him,”

No budging on budget

Christie carefully stayed away from letting any budget details loose in his press conference today.

Overall, he said it will have job creation, tax reduction, and economic stimulus.

Asked whether appointment nominees who have been frozen by the Dems will be part of budget negotiations, he said he did not expect it. Last year, that didn’t happen, he said.

Hands off for redistricting

Christie pronounced his faith in the Republican redistricting committee when asked today, but offered no opinion in the stacking and unpacking conversation.

“I haven’t gotten into that level of detail on it,” he said.

One thing he was clear about: the 2001 map was “unfair and unconstitutional,” Christie said.

“I heard Ann Coulter’s opinion,” he said today. “It’s not going to be me.”

Gov chides OLS for bowing to the majority

The Office of Legislative Services is estimating the current structural deficit to be upwards of $10.5 billion, but Christie told the press to have no faith in that number.

“You guys should really stop calling them the non-partisan Office of Legislative Services,” he said. He said the law-guiding department does nothing but bend to the will of the majority power, be it Democrats or Republicans.

Their analysis in this case, he said, is based on the assumption that last year’s budget cuts will carry through and be increased. 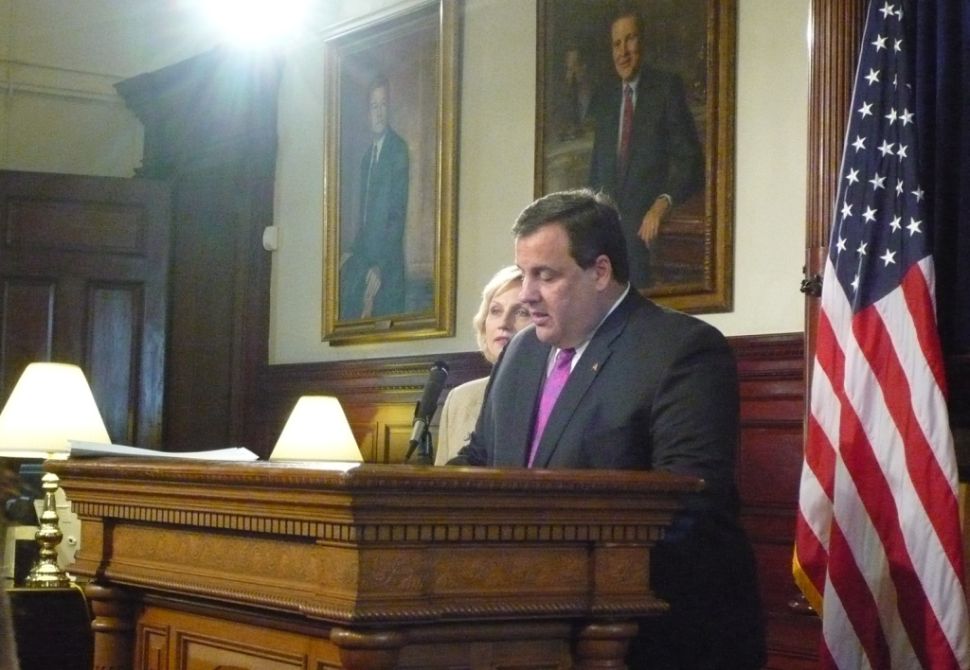