Several different groups gathered Monday at the Statehouse opposing proposals to privatize public services, saying the move will lead to having companies doing work that will be more intent on pleasing shareholders and making profits than providing quality services.

Jim Walsh, of Food & Water Watch, said privatization will perpetuate corruption and have “an adverse impact” on taxpayers and rate payers.

He expressed some concerns about  a recent proposal by Camden officials to privatize its animal control services. Officials at the press conference also cited past failures of privatization, such as the North Brunswick water service, and state auto inspections, among other items.

Jeff Tittel, director of the N.J. Sierra Club, said privatization could pose big environmental problems, saying the companies who will do work currently done by public workers will “care more about the bottom line than consumers.”

“The quality goes down and prices go up,” he said. “The environment is threatened.”

The drive toward privatization could mean less open space for residents to visit, as parkland may come under the control of a corporation or another private entity, he said.

“The word privateer comes from privatization,” Tittel said. “Privateer is another word for private.”

To cut costs at the authority, Ehret said the union has offered $16 million in concessions, through pay cuts and pay freezes. The plan has yet to be finalized.

All the groups gathered – which also included Progressive Democrat of NJ, the New Jersey Tenants Organization, among others – made up the newly launched New Jersey Coalition of Privatization to give support to a resolution, S-2323, that would amend the state Constitution by setting minimum standards and practices.

At least one Democratic legislator supported the group’s cause,

“We’ve seen many instances in the past where privatization of various state functions was rushed into blindly without a full understanding of how it would impact the delivery of services, the workers involved in the operation or the long-term costs to the state,” said Assembly Speaker Shelia Oliver, (D-34), in a prepared statement. 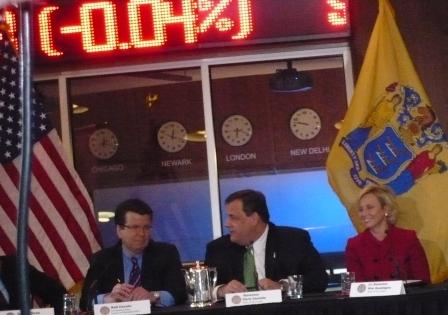