A conservative group, Americans for Prosperity, plans to stage a counter-rally on Friday in Trenton to the planned pro-labor demonstration.

“States like New Jersey and Wisconsin are broke and the state worker unions are largely to blame,” said AFP-NJ state director Steve Lonegan.

The labor rally, which will include national and statewide AFL-CIO officials as well as other labor representatives, will be staged in response to Gov. Christie’s support of the Wisconsin governor’s attempt to do away with most collective bargaining rights for workers in his state.

The counter-protest, including AFP and Tea Party activists, will protest the demands being made by public employee unions, and will take place in an increasingly charged atmosphere nationwide in which conservative groups such as the Tea Party organize demonstrations in opposition to pro-labor rallies.

Both rallies are scheduled for noon outside the Statehouse.

“On Friday, taxpayers will join together to show support for (Wisconsin) Gov. Scott Walker’s common sense fiscal reforms and to send a message to the public sector unions that enough is enough,” said Lonegan, former Bogota mayor.

The prospect of a counter-demonstration does not bother Wowkanech, the statewide AFL-CIO head.  Instead, he thinks it will inspire his people.

“I think it’s making our crowd turn out in bigger numbers,” he said Thursday. He said he expects thousands of people to turn out, but could not get more specific.

He also did not expect any problems between the two groups, since they will be separated, and both state and Trenton police will be on hand.

“We’re just here to support what’s going on,” he said in reference to the public workers fighting to protect their collective-bargaining rights in Wisconsin.

Lonegan said he welcomed the chance to represent on Friday the opposing point of view in support of the givebacks being sought by Gov. Christie.

What labor is doing, he said, “Is part of a national strategy on behalf of (President) Obama and union leaders to build support for their left-wing agenda.”

He said his group, a coalition of Tea Party organizations, cannot match the numbers of demonstrators the unions will put on State Street Friday. His group has been using Facebook and phone calls to draw out as many supporters as possible.

They have reached out to the governor to speak, but Christie spokesman Kevin Roberts said the governor will be out of state at a national governor’s conference. Lonegan said they have confirmed Sen. Michael Doherty, (R-23), of Washington Twp., as a speaker.

“Now the public has woken up to the high costs (of government) and there is finally pushback,” Lonegan said. 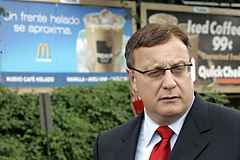