NEWARK – Packed in here without a lot of elbow room, local worry furrows the brows of a lot of recognizable faces here on the 14th floor of the downtown county building at this public reapportionment hearing where sharp elbows threaten to fly at the front of the room on the subject of packing.

But the larger issue of race finally dictates.

“We must implement a map that allows the diversity of our daily lives to be represented,” says Assemblywoman Sheila Oliver (D-East Orange), a Democratic member of the commission. “My legislative district, the 34th, has consistently elected two African American legislators while having only one-third of its voters African American. Clearly, we have more work to do but we cannot turn the clock back.”

The argument anticipates what the Democrats interpret as a Republican argument that would create legislative urban districts dominated by African Americans or Latinos and open the suburbs up to up-for-grabs battlegrounds.

“I’m here to ensure that fairness is preserved in the totality of our districts,” Sharif tells PolitickerNJ.com.

But maverick state Sen. Ronald Rice (D-Newark) wants a bit of both, or neither of both, depending on how you look at it. He doesn’t want what he says was the travesty of 2001 repeated. He wants coherent, contiguous neighborhoods composing legislative districts.

Having said that, he assures PolitickerNJ.com that he does indeed want to keep Belleville and Bloomfield in his district, even though those towns initially joined in part to blow him out of office.

In her testimony before the commission, state Sen. M. Teresa Ruiz (D-Newark) gripes that she’s the only Latina in the state senate. But it’s better than nothing, and any future map has to build on the past decade not depart course, she argues.

“The current map, which does not endorse packing, produced the highest number of Latinos and African Americans,” she says. “Packing is not progress.”

“We all use the word ‘minority’ when speaking about African-Americans and Latinos,” says Rahaman Muhammed, president of the Employees International Union SEIU Local 617. 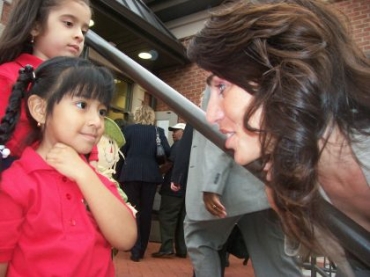