TRENTON – The Democratic leadership criticized Gov. Chris Christie’s second annual budget address and the merits of his $29.4 billion budget as misleading and divisive.

“The governor talked about the New Norm,” said State Sen. President Steve Sweeney (D-3), of West Deptford. “There’s nothing new about what the governor is talking about.”

Sweeney said Christie is still short-funding the schools aid formula and shifting the state tax burden to the local level, asking municipalities to do more with less.

Without much information coming out of a morning briefing from the Governor’s Office, the Democrats were at a loss for specifics at times during their response.

“Honestly, he wasted our time,” Sweeney said. “It’s been so secretive, it’s like a grand jury.”

“That’s not an ultimatum,” Sweeney said. “We put a plan out there.”

Assembly Speaker Sheila Oliver, (D-34), of East Orange, said increases in tuition aid and charity care are encouraging, but, “There were some things we did not hear.”

She said Christie is going back on his “firm commitment that the taxpayers will receive their promised tax credit on their tax bills this spring.”

Not only that, she said the pension payment needs to be made statutorily, not as a part of a bargain. “Those payments have to be made regardless of any progression of legislation.”

School funding, she said, isn’t as great as it sounds at $250 million restored, especially when over $800 million was cut last year. “There are 566 school districts in the state,” she said. “It does not have significant impact.”

Majority Leader Joe Cryan, (D-20), of Union Twp., was also disturbed by the governor’s bartering of policy and payments.

“If these proposals are strong enough, they should stand on their own,” he said. Christie’s taking the “opportunity to divide people to play people against one another.”

“Like it was some sort of a game show,” Cryan said, saying the governor is “more interested in giving tax breaks to dead millionaires.” 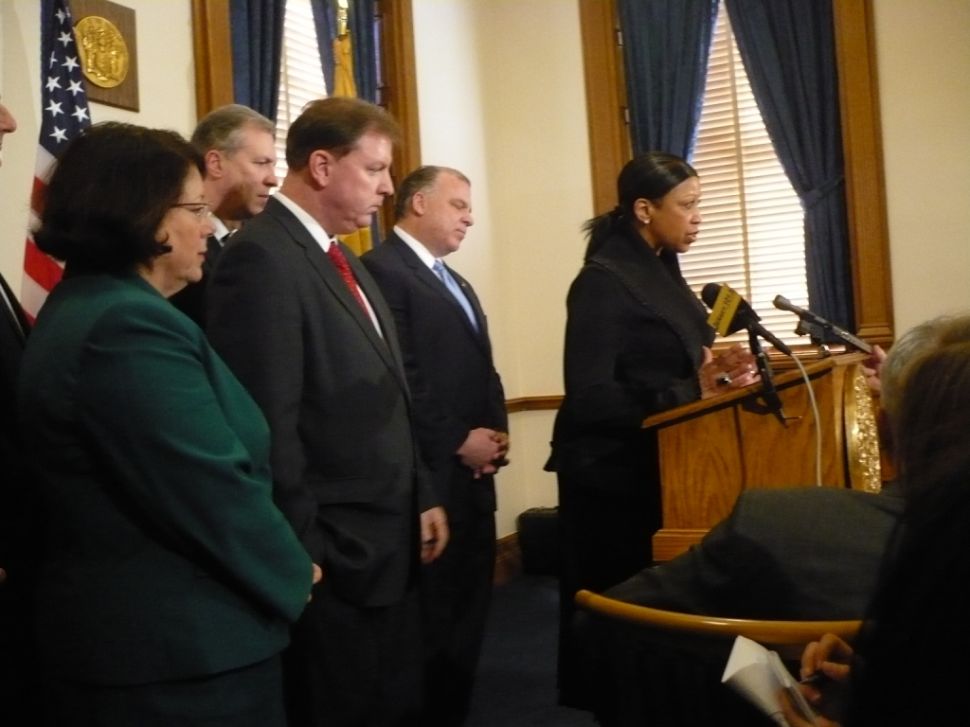