JERSEY CITY – All under the guise of manners and civic restraint, members of the redistricting commission occupy their chairs here in a second-story meeting room at the culinary institute of Hudson County Community College and begin politiely but forcefully grappling on race representation.

The sedate atmosphere here is a mask for tense, very tense emotion and competitive desire as the members apparently impossibly seek a map resolution prior to a March 5 deadline.

“It’s very ethnically diverse both in population, and in terms of the people who represent it,” U.S. Rep. Albio Sires (D-West New York) tells the commission, referring to Hudson County; a gentle deflating of Republican Commissioner Irene Kim Asbury’s point moments ago that based on population upticks among Blacks, Asians and Hispanics, minorities should have greater representation.

Jersey City Mayor Jerry Healy says he believes the census takers might have missed 20,000 people in adding up the population of New Jersey’s second largest city. The feds concluded that Jersey City grew by 7,000 over the past decade.

“At some point, getting two districts for our city will ensure that we get 100 percent representation,” Healy says, and adds, “Stacking doesn’t help Jersey City or any of our minority people. Please avoid it.”

To that point, the Democrats front end a lot of Latino reps in an apparent effort to smother any Republican argument that Latino numbers aren’t sufficient in seats of power – and quietly gnash their teeth over what they see as the hypocrisy of the GOP to concern itself in the aftermath of history with Latino representation. Following Sires, Healy and state Sen. Sandra Cunningham (D-Jersey City), Assemblyman Ruben Ramos (D-Hoboken), Assemblywoman Caridad Rodriguez (D-West New York) and Assemblywoman Annette Quijano (D-Elizabeth) hit the microphone on behalf of establishment Democrats.

“We are what’s right,” says Ramos, referring to the 33rd District apportion of representation.

“I came here to set the record straight,” says Quijano, days after a long line of Latinos attempted to beat up Quijano’s running mate, Assemblyman Joe Cryan (D-Union Twp), and suggest that as an entrenched white male, he shouldn’t be serving a heavily Hispanic district.

Quijano points out that hers and Cryan’s district contains a broad and diverse representation.

Bill Palatucci immediately tries to brand her as an appointed establishment figure.

“Did you ever run in a primary against Assemblyman Cohen?” asks the GOP commissioner, referring to disgraced former Assemblyman Neil Cohen, who occupied Quijano’s seat before her.

“You got on the ballot the first time through a convention?”

Palatucci says he has no further questions.

Now – in a distinct display of the divide, whether real or dramatized for the purpose of this hearing – the anti-establishment Latinos begin to testify as Perth Amboy Mayor Wilda Diaz faces the commission and takes a dig at the white males who hold most seats in a Democratic Party-dominant county.

“The district is represented by three white men,” says the mayor, facing one of her own legislators, a mostly-face-down and scribbling Assenblyman Wisniewski.

“How can a large municipality dominate the Senate, freeholder and Assembly and yet have no representative?” Diaz wonders.

A question hangs at the end of Diaz’s testimony. Will Wisniewski engage or leave unanswered the critique of a rebellious Democrat from his own district? But the mayor softens her critique when she sets the record straight by mentioning that Wisniewski tried to help fill the vacancy when Assemblyman Joe Vas got jammed up and out of office. Wisniewski supported Diaz’s selection, former Superior Court Judge Mathias Rodriguez, but couldn’t dislodge the choice of Woodbridge Mayor John McCormac, Assemblyman Craig Couglin.

So far, every Latino elected official except Diaz, Paterson Councilman Julio Tavarez and Perez has served as an apologist for the current – more or less – structure.

A registered Democrat discontented with the power structure, Perez attempts to blast apart the establishment foundation. He argues that five percent Latino representation in the assembly and two percent in the senate do not accurately reflect 2010 census figures that show Latinos accounting for 18 percent of New Jersey’s population.

“Packing is a red herring,” says Perez, suggesting it is a term used by Democrats to protect their stranglehold on districts they have inadequately served, in his view. His wife, attorney Patricca Bombelyn, an unsuccessful mayoral candidate in New Brunswick last year, later specifies that she would like to see a district that includes Perth Amboy and New Brunswick.

“The progress that has been achieved has been attributable to the Democratic Party, which has recognized the diversity of our communities,” argues Pou. “It’s a good start, but we need to do much more.”

Despite political experts opining that neither side can yet claim an advantage, both Republican and Democratic commissioners quietly celebrate what they insist are critical psychological victories.

“It’s getting to Sarlo,” crows one Republican, ecstatic over state Sen./Mayor Paul Sarlo’s (D-Wood-Ridge) efforts to defend himself in the 36th District where he oversees Latino torque point Passaic. (By the way, in discussing his record as a friend of Hispanics at last Tuesday’s hearing, Sarlo mentioned his proud vote in favor of Sires to be the first Lationo speaker of the assembly, causing the GOP to grumble foul).

“The body language between the two of them doesn’t bode well for the Republicans,” giggles one Democrat, intent on expanding a rift between Palatucci and Webber.

Republicans saw a stab line wound open up, too, in the testimony last week of state Sen. Ronald L. Rice (D-Newark), longtime leader of the Legislative Black Caucus, who identified the decade-old map as a travesty as it relates to the interests of minorities. 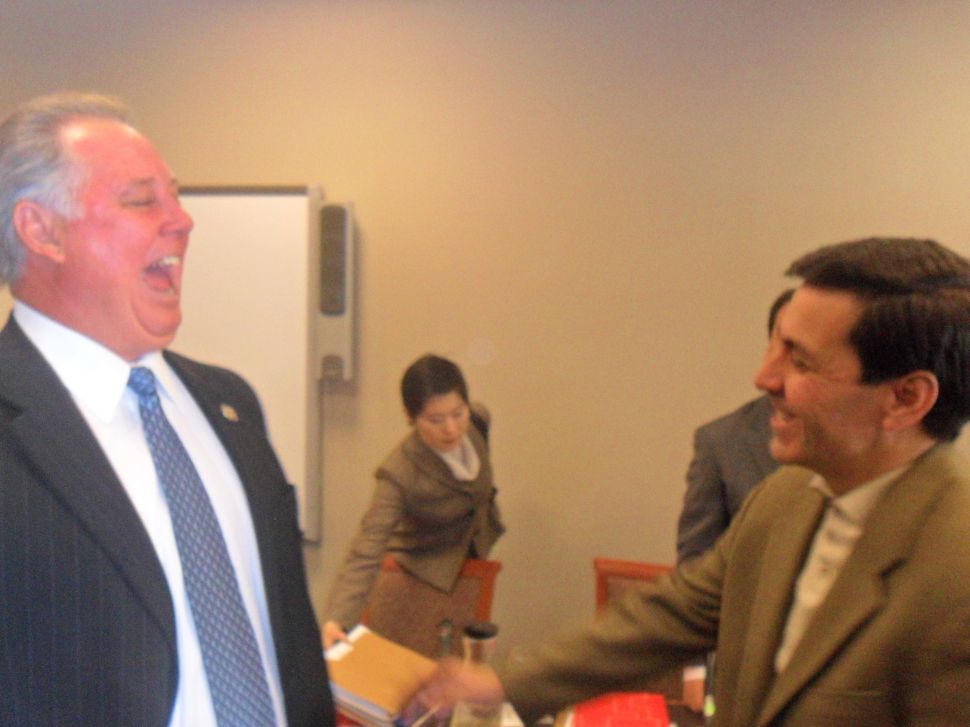