TRENTON – Amid persistent rumors that he’s running for U.S. Senate in 2012 as the anti-establishment Republican alternative, state Sen. Michael Doherty (R-Washington Twp.) gripped a podium at the head of a committee room packed with Tea Party activists and welcomed them to the Statehouse.

A surge of clapping ensued from a crowd that moments later would take a tour of the Trenton channels of power, following a second address delivered by state Sen. Steve Oroho (R-Franklin Twp.).

One man told Doherty machine politics is too entrenched on both sides in New Jersey for a legitimate takeover by Tea Party sympathizers.

“I come from District 3,” he said, “and unless you’re predetermined to move up the ladder, you have no right to run for office. That’s the position.”

A victor as an outsider to the organization when he ran in 2009, Doherty disputed the argument.

“You can do it,” he said. “I’ve never been a party insider, even as an incumbent.”

Organized via email blast by conservative activists Rob Eichmann and Bill Winkler, turnout jammed the seats in both sections of the L-shaped Committee Room 6 in the annex. Less than a week prior to Gov. Chris Christie’s budget address, Doherty engaged in a sustained Q and A. There was angst in the room over the administration’s decision to grant special aid to schools in districts with Democratic Party power brokers in charge, at the expense of hard luck towns in Republican districts such as Phillipsburg.

The conservative senator said he intends to withhold judgment about the budget until after Christie’s address next week.

“The governor’s indicated that he’s concerned about the schools funding formula, and I’m looking forward to what he has to say,” Doherty told PolitickerNJ.com.

During the back and forth with the Warren County senator, one activist rose and asked why they couldn’t just impeach the New Jersey Supreme Court, sending one in-the-shadows Republican insider into a cringing posture with his head in his hands. “You can’t impeach, unless he’s done something illegal,” the operative groaned.

But with at least one acknowledgement of Highlands Mayor Anna Little, a Tea Party diehard who ran and got stomped on last year by U.S. Rep. Frank Pallone (D-Long Branch), Doherty appeared eager to familiarize the troops with as much of Trenton as he could in one day.

“The whole goal is to orient these folks on how the process works,” said the senator. “We’re going to have a few of them up to our Republican caucus, and we see this as a good, positive development.” 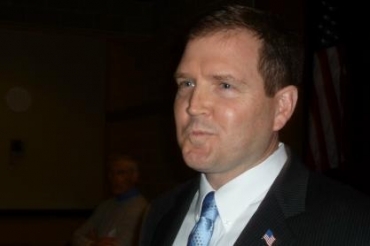