A package of hybrid-friendly bills passed the Assembly Thursday and will now work their fuel efficient through the upper chamber.

Benson said before the meeting that the charge behind his hybrid vehicle bill A3651 was that it provides for a healthy environment and a strong economic climate. “It is ultimately healthy for the nation,” said Benson.

“I am hoping the tax revenue received from implementation and creation of jobs will add to revenue…therefore I project a $500,000 tax credit would incur,” said Wagner on the Assembly floor. “I am hoping it will jumpstart the economy… and looking forward to working with governor to promote new jobs and technology that is safe for the people.”

Republican Budget Officer Declan O’Scanlon (R-12), of Little Silver, questioned Wagner on whether or not the administration would provide for the bill in the upcoming budget.

Wagner said she discuss the program with Gov. Christie, adding a three–year tax credit with a phase out would benefit New Jersey residents right now.

Quickly recalling attending the Worlds Fair, Wagner likened the bill to the fair’s Carousel of Progress. “This is the time we need to get there and I want to see New Jersey in the lead,” she said before the bill was passed.

Her push to see states receive funding from the government is critical to the health and welfare of New Jersey residents. According to the bill, more than 600,000 missed school days per year and at least 2,300 premature deaths per year are related to global warming, which would be significantly reduced by replacing motor vehicles with electric vehicles. 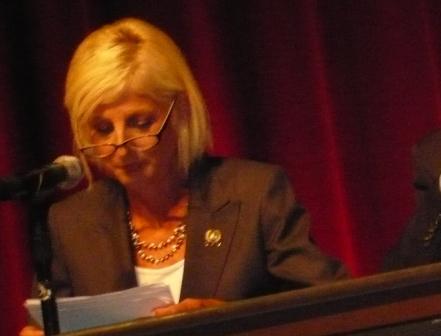