Among other revenants, the ghost of Satyajit Ray haunts what one might call Indian independent cinema. At two recent festivals in New York, the Bengali auteur was very much in attendance: in Autograph, a Bengali film about a fictitious project to remake Ray’s Nayak (1966); in Charulata … a Sequel … of the Life Untold!, a Malayalam film about a fictitious project to make a sequel to Ray’s Charulata (1964); and in Gandu (“Asshole”), which gamely combats the malaise of post-Ray Bengali art productions–airless, dour, black-and-white shots of plump bourgeois staring into space–with music-video interludes of the gloomy, shaven-headed Gandu shouting hard-core punk, and with an extended finale of lush, full-color hard-core pornography.

“There now is something called ‘independent cinema’ in India,” Galen Rosenthal, the program director of the South Asian International Film Festival (SAIFF), told The Wall Street Journal. So how might the organizers of SAIFF and of the Mahindra Indo-American Arts Council festival (MIACC), the two largest, oldest and last in a run of a half-dozen such festivals that took place this fall, demarcate this novel category? Going by their curation, it includes the country’s popular regional cinemas; films made abroad by persons of Indian heritage; films made in India by foreigners; films designed specifically, even cynically, not for domestic consumption but for the international festival circuit; and any Hindi film made by smaller players. Is it, then, simply Not Bollywood?

Only this negative definition can account for, among other curious inclusions by both festivals, the most appealing film screened at either: a Tamil-language production based on the Sanskrit epic the Ramayana and boasting not only the marquee director Mani Ratnam and one of the largest budgets of any Indian film in history but also the superstar Aishwarya Rai, the Most Beautiful Woman in the World. Raavanan, in which an aggrieved bandit-king kidnaps the wife of the police officer trying to assassinate him, is the rare film that answers the halfhearted prophecies of mainstream Indian cinema’s imminent breakthrough in North America: a story that is both indigenous and universal; imagery that is riotously, unnecessarily, nonsensically exuberant; musical numbers that feel natural and coherent rather than a reverse-engineering of the soundtrack into the film; production values sufficient to overcome kitsch; coracles, gang rape, wire-fu. The “independence” of this particular juggernaut is the more dubious when one considers that Raavanan was simultaneously shot and separately released as Raavan, a Bollywood version that switched out the Tamil actor Vikram for the Hindi-film star Abhishek Bachchan. (It’s possible the festivals’ avoidance of Bollywood fare owes less to curatorial rigidity than to fear of a genre ghetto.) Mr. Bachchan, opposite real-life wife Ms. Rai, is ruinously miscast; Vikram, who offered sexy respite from the pampered sameness of Bollywood’s leading men, was in Raavan demoted to playing bad cop to Mr. Bachchan’s raving antihero, an insatiate, bloated, kohl-eyed monster who resembles what Dave Navarro might look like after eating the other members of Jane’s Addiction.

I asked Irrfan Khan–the titular Paan Singh Tomar in another festival film about a charismatic outlaw fighting corrupt cops, and an actor whose greater favor in Western films than as a conventional Bollywood lead is probably due to his own interesting looks (which put me in mind of a compliment The Times’ Bosley Crowther once paid Jean-Paul Belmondo: “hypnotically ugly”)–about the problems India’s independent filmmakers seem to have in staking out their territory. Mr. Khan believes that subject matter is in part to blame. Although he dismissed the charges of poverty-peddling that dogged and outlived Ray, of today’s filmmakers he said, “The festival films, they are about poverty. We are still looking for a voice that is universal, which doesn’t have to deal with the poverty, with how pathetic conditions in India are.” 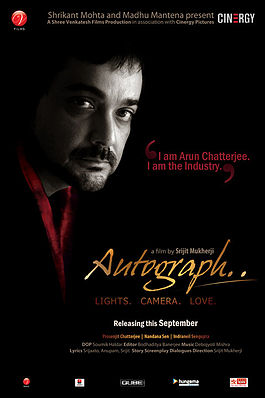