It was an hour-long meeting designed as a delegation roundtable, but old rivals Gov. Chris Christie and U.S. Sen. Bob Menendez (D-Hoboken) turned part of the Wednesday morning session – probably predictably – into a mano-a-mano.

Menendez said he was tired of Christie making public statements badmouthing state dependency on federal government dollars and publicly eviserating the delegation, but then – when he himself wants something – leaning on Congress to “carry .”

“I never heard from you on the tunnel,” Menendez said.

“That’s not true, I reached out,” Christie said.

“You send mixed messages,” Menendez complained at one point.

According to sources in the room, a visibly agitated Christie went back hard at Menendez, and the two men exchanged verbal power punches. The GOP governor said he was sure that if he examined Menendez’s record he would find examples of how the U.S. senator’s rhetoric didn’t match his actions.

In a more peaceful moment of the closed door political romp, Menendez and U.S. Sen. Frank Lautenberg (D-Cliffside Park) were visibly gratified by Christie’s receptivity to the Gateway Tunnel project they support as an alternative to the Christie-stymied Access to the Region’s Core (ARC) tunnel.

Lautenberg nattily handed Christie his phone number and told him he could call anytime to discuss. 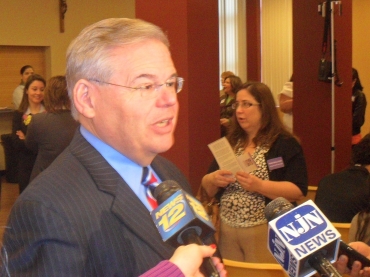