As the debate over the new legislative districts – and control of the State House for the next decade –  rages on, the first map has emerged from the bowels of the redistricting process.

In a meeting held in early January between Senate Minority Leader and Center for a Better New Jersey Vice President Tom Kean Jr. and leaders of the Latino Leadership Alliance, the two sides discussed a small snapshot of what is shaking out to be a push for more Hispanic-dominated legislative districts – and the possibility of more Hispanic representation in the state legislature.

One map that materialized from those discussions delineates just five districts encompassing portions of Essex, Hudson and Union counties, but sources say the potential ramifications of the map are enormous.

The map – dubbed “Regional –North,” would create three majority Hispanic districts in the heavily Hispanic portion of the state, while upping the overall minority population in two more districts.

Among the bombshells contained in the sample map is a district – denoted on the map as District 4 – that would combine Elizabeth and portions of Newark into one Hispanic dominated district.  The new district would pit powerful state Sen. Ray Lesniak (D-20) of Elizabeth against the only Hispanic member of the Senate – Sen. M. Teresa Ruiz (D-29) of Newark – in a district made up 56 percent of Hispanic residents.

The new configuration also would create a Hudson County District made up of East Newark, Harrison, Kearny, Secaucus, North Bergen, Guttenberg, West New York, while adding in the Bergen County Towns of Fairview and Edgewater.

That District, currently 32, is now represented by Sen. Nicholas Sacco, who would pick up West New York, Guttenberg  and Edgewater. The Hispanic population in the district would increase to 51.54 percent, up from 48.8 percent in its current configuration.

District 33, now represented by Democratic Sen. Brian Stack (D-33) would lose West New York and Guttenberg while taking on more of Jersey City.  The district would continue to be a majority Hispanic district at 50.9 percent, down from 54 percent.

A fourth district would continue to combine Belleville and Newark, but would change the configuration, keeping it a district with a majority of black residents, while adding to the overall minority population.  Another would combine the portion of Jersey City not in the 33rd District and Bayonne, again upping the number of minorities in the district over the current design but leaving no group as a majority.

Republican commission member Bill Palatucci would not comment other than to say he has not had any meetings with any organization to discuss a map or specific districts.

“I consider this current stage to be ‘fact finding’ and look forward to meeting with our Democrat counterparts soon,” he said.

Latino Leadership Council President Martin Perez said the discussions were very preliminary, with each side exchanging data.  Perez denied that any map came out of the discussions.

Bill Ayala, legal committee chairman of the Latino Leadership Alliance said he could not verify the map, but there are multiple scenarios all based on old data.

“It’s a useless map that is based on old data and it’s not something that can be submitted,” Ayala said. “The meeting with the Republicans happened before the census data came out.  I think a lot is being made out of nothing – this is a red herring- it’s a diversion.”

Democrats say the map is an obvious attempt at “packing” minorities into as few districts as possible, a strategy the GOP has denied.

“I think that notwithstanding the Republican protestations to the contrary about packing and their statements that they have never been advocates of packing, the map as I understand it is doing just that,” said Assemblyman John Wisniewski, who is chairman of the Democratic redistricting team. “They want to rearrange minority communities to compress them into as few districts as possible and the consequence is to create more non-minority districts for Republicans.”

Other Democrats say the strategy on the part of the Latino Alliance is shortsighted and throwing their lot in with the GOP will end up hurting their fortunes in the future.

“Will this produce a map that adds a few minority representatives at the expense of a Republican-controlled legislature that will be hostile to Hispanics?” asked one Democratic insider.

“Even if this is a real map and you are looking at a 56 percent Hispanic district, that’s not packing.”

The potential fallout from the map is significant, Democrats say.

A district that matches Newark and Elizabeth would create a 10-year power struggle between Union and Essex County Democrats, not to mention potentially pitting Lesniak and Ruiz against each other.

In Hudson County, Democrats say the removal of West New York from the 33rd District would not sit well with Stack.  Assemblywoman Caridad Rodriguez, a Stack ally, would be moved to the new district setting up a struggle between Stack and Jersey City Democrats for her replacement, not to mention giving West New York Mayor and Stack rival Sal Vega a new power platform in the newly refigured 32nd District.

Republicans have not said publicly that they plan to pack districts in their version of the map, and dispute charges to the contrary.  But sources familiar with the Republican strategy say with Hispanics becoming the largest minority group in the state, more Latino representation and a greater number of majority minority districts are logical offshoots.

See a PDF version of the map below. 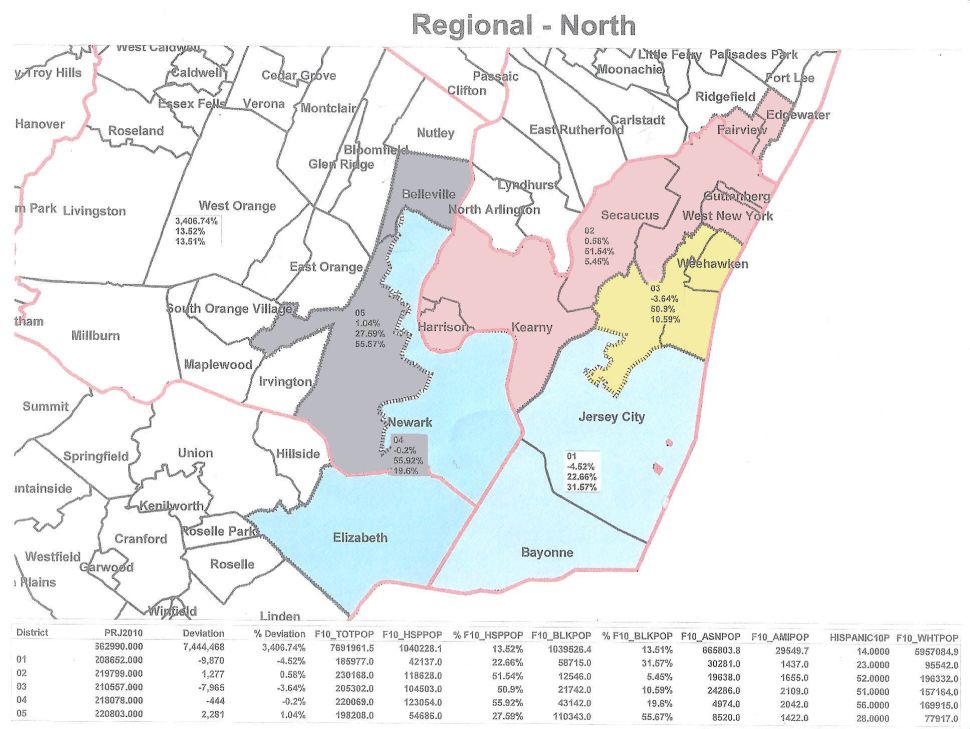