James (Jimmy) Zangari, former New Jersey State Assemblyman and Essex County Freeholder, 81, died today.  Friends and former colleagues called the former legislator a devoted family man and an influential and colorful lawmaker who was legendary for promoting bipartisanship through his sense of humor and love of cooking.

Mr. Zangari was born in Newark at the start of the Great Depression, in 1929, to immigrant parents from southern Italy.  When “Jimmy” was 10 years old, his mother, Francesca, died from complications during childbirth.  His father, Pietro, had no relatives in the new country to care for his seven children, so Jimmy and his siblings were placed in various orphanages around Newark.

Jimmy was educated in the Newark public schools, and attended school in Italy for four years.  He served in the Army in Japan during the Korean War, from 1946 to 1947.

After a successful career in the construction business, Jimmy felt the urge to serve in government.  In 1972, he was appointed by the late Irvington Mayor Harry Stevenson as director of housing, a position he held for 11 years, until 1982.  His work on urban renewal was cited in the Congressional Record.

In 1977, Jimmy’s passion for public service extended to elective office; he ran for a seat on the Essex County Board of Chosen Freeholders and won. In fact, the novice political candidate garnered the most votes of all county-wide candidates that year. A rally held in his honor during the campaign at the old Town & Campus restaurant in West Orange was memorable in political circles for its size.  A record crowd of 2,200 supporters filled every inch of the catering hall and spilled into the parking lot.

“We knew then that we had a politician par excellence on our hands,” recalled former Assemblyman and Essex County Freeholder Harry McEnroe in a retirement video tribute to Jimmy taped in 1996.

As a freeholder, Jimmy took a particular interest in the county’s dysfunctional geriatric facility and took the unusual step of setting up an office there.  He was widely acknowledged as the person who singlehandedly overhauled the hospital’s operations.

Following a change in the form of county government, Jimmy was drafted to run for the New Jersey General Assembly.  He was elected in 1979 and re-elected eight times before retiring at the end of the 1994-1995 legislative session.

Jimmy quickly ascended the leadership ladder, becoming an assistant majority whip as a freshman assemblyman and rising to the position of deputy speaker later in his legislative tenure.  He served full-time in the part-time position and enjoyed mixing his passion for Italian cooking with politics by setting up a kitchenette in his legislative district office where he routinely hosted small lunch groups of Democrats and Republicans from governors and congressmen to county and local officials.

Former Governor Jim Florio recalled in the video tribute that one of the things he most missed about being governor was enjoying the assortment of Italian food that Jimmy would bring to the State House on session days.

Jimmy also brought his sense of humor and infectious smile to Trenton.  And he traveled there most Mondays and Thursdays in a van pool of northern New Jersey legislators from both parties.

On her first day as an assemblywoman, Loretta Weinberg, now a state senator, was nervous as she approached her first important vote.  Jimmy, whose desk was next to hers, said something humorous “causing a ripple of laughter and everyone relaxed,” she recalled in the video tribute.

“It is true that Jimmy kept his eye on the ball, kept us all grounded.”

Former Republican Assemblyman Nicholas Felice shared a similar freshman story.  “When I entered the legislature, Jimmy was one of the first people to come over from the other side of the aisle not only to say hello but to give me an idea of what was going on and show me the ropes,” he said.

“He took down days and brought some humor to them,” added another Republican, State Sen. Robert Singer.

Jimmy served as chairman of the Assembly Independent and Regional Authorities committee, winning editorial praise for questioning the accountability of independent state agencies.  He also served on the Assembly Appropriations committee for several years.

Jimmy was the prime sponsor of many important laws including first-in-the-nation legislation dealing with leaking underground storage tanks and a bill requiring all auto parts to be serial numbered to reduce then-rampant auto thefts in the state.

His most controversial legislation required public schools to provide a period of “quiet and private contemplation or introspection” at the start of each school day.  The bill passed both houses of the legislature in 1982 but was vetoed by Gov. Brendan Byrne on constitutional grounds.  Undaunted, Jimmy re-introduced the bill in the next legislative session.  Both houses again approved the legislation, but the governor – newly elected governor Tom Kean – vetoed it; only this time, Jimmy mustered all his political skills to achieve the first override of a gubernatorial veto in over 30 years.  The enactment of the “Moment of Silence” law sparked a national debate.  Ultimately, a federal lawsuit challenging the law reached all the way to the U.S. Supreme Court which upheld lower court decisions ruling it unconstitutional.

Jimmy remained a close ally of both Byrne and Kean.  “He will be remembered for his figure, determination and enthusiasm.  Jimmy helped many people and he helped me accomplish a great deal,” Byrne said in the video tribute.  Kean recalled Jimmy’s “cheerfulness, optimism and willingness to give support on a bipartisan basis when it was in the public interest.”

Jimmy was the recipient of dozens of public service awards including legislator-of-the-year awards from virtually every state and local law enforcement fraternal group.

Lobbyist Hal Bozarth said Jimmy taught him “something special, that politics is a very personal business” while lobbyist Alan Marcus observed that Jimmy’s retirement was “truly the end of an era in Trenton because legislators now take it too seriously, there is no more fun.”

Another lobbyist, Dan Detrolio, recalled a time when Jimmy gave then-presidential candidate Bill Clinton a set of cufflinks bearing the State Seal and a subsequent time when Jimmy asked President Clinton on a return visit to the state why he wasn’t wearing the cufflinks.  “Jimmy was one of the only guys I know who could admonish the president of the United States and think nothing of it,” said Detrolio.

Upon retirement, Jimmy and his wife, Anna, spent most of their time in Boca Raton, Florida.

Jimmy’s last public speech was in the fall of 2000 when he was inducted into the Essex County Democratic Party’s Hall of Fame.

In introducing Jimmy, Assemblyman Tom Giblin, who served with him on the county freeholder board, told the audience, “The measure of a man is the reputation he leaves behind.  Talk to any Democrats or Republicans who served with Jimmy and they will all agree that he was one outstanding member of the General Assembly and that he epitomized the best as far as what a legislator should be.”

Another party leader, former party chairman Ray Durkin, said, “Some people in politics are admired and some are respected but Jimmy was loved, by me and the Democratic Party in Essex County.”

Beyond public service, Jimmy was involved in many charitable and community activities.  In particular, he worked extensively to aid children with intellectual and developmental disabilities and their families.

Funeral arrangements have not been finalized 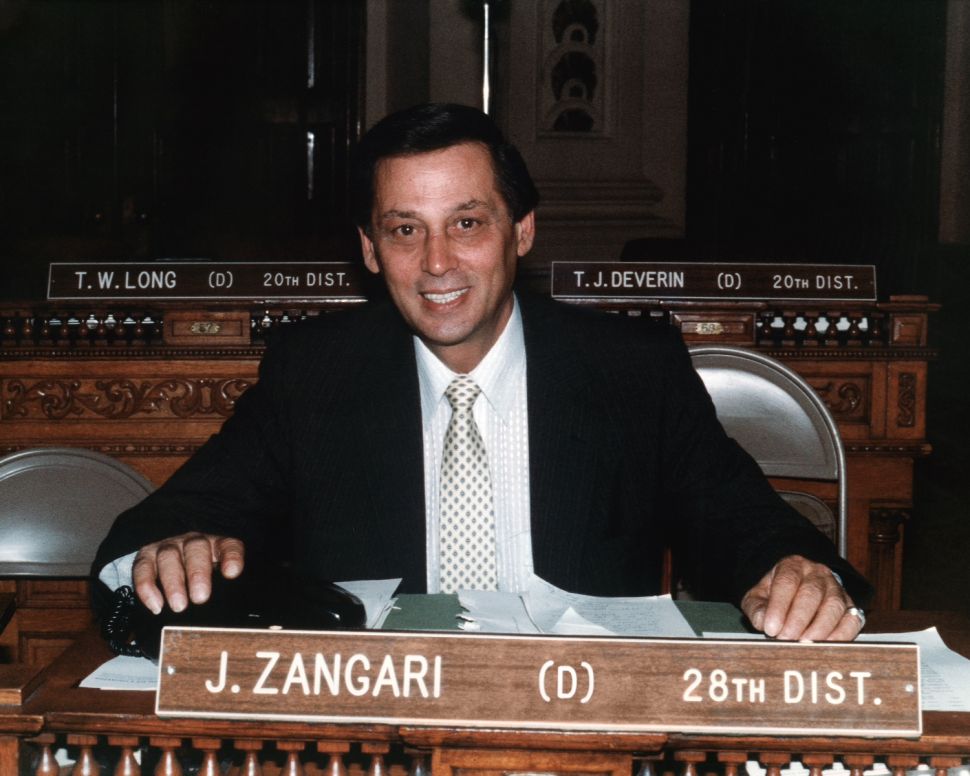