PERTH AMBOY – A few blocks up from the docks in this maritime city, Mayor Wilda Diaz told a crowd at the Dr. Herbert N. Richardson School that Perth Amboy surpassed the magic number of 50,000 in the 2010 census, making it vitally eligible for more federal dollars and reflecting a statewide trend of a rising Latino population.

The local census data represents a big deal for Diaz, standing in front of the banner with the number 50,814 printed on it in bold letters. The mayor formally kicked off the census effort a year and a half ago at the school, and now, in the midst of a statewide redistricting battle, sees wider implications for the long down-on-its-heels waterfront town, which is 70% Latino.

“We do not have the representation we deserve, whether it’s in the county or in the legislature,” independent Democrat Diaz told PolitickerNJ.com. “We have a large population and yet we have no freeholders and no legislators. I want them to look at Perth Amboy right now.”

If that means rejuggling the districts to empower Perth Amboy, Diaz wants it done.

As local residents emptied the auditorium, among them children from each of Perth Amboy’s schools who won a contest to guess the correct population of the city and who won as a reward the chance to be mayor for a day, a jaded Democratic Party operative fumed in the shadows.

“The Democrats ought to be ashamed of themselves,” he said. “All they’re trying to do with this whole redistricting process is protect incumbents. Paul Sarlo is public enemy number one, as far as I’m concerned. Here’s a guy who has two public jobs, who’s taking a job away from a Latino in Passaic County.”

State Sen. Paul Sarlo (D-Wood-Ridge), who sits on the redistricting commission for the Democrats, also serves as mayor of Wood-Ridge. He was one of the most obvious targets hanging out there for Republicans to try to bang up last night at the redistricting commission hearing in Newark, but a trudging line of Elizabeth residents also went after Assembly Majority Leader Joe Cryan (a Democratic commissioner representing Cuban haven Elizabeth) and GOP Commissioner Bill Palatucci at one point uncorked Perth Amboy, too, with Redistricting Commission Co-Chair John Wisniewski – a Democratic Party assemblyman who serves Perth Amboy – sitting at the same long table.

“I’d love to hear from Mayor Diaz on how she thinks it should be redrawn,” he said of the 19th District. “I do not begrudge any municipality wanting more representation on the legislative level but that’s a different issue than ethnic makeup.”

“This current map gives us Linda Greenstein in the 14th, where a Republican senator occupied that seat previously; Jeff Van Drew in the 1st. There are seven legislative districts after this map was created in which Democrats were able to gain seats. In short, competitiveness.”

The commission co-chair said he knows there must be changes to the map based simply on population shifts, so takes issue with the characterization that Democrats want merely to preserve the status quo.

Of course, in the aftermath of last night’s hearing he reserved the bulk of his ire for the GOP.

“The chutzpah of the five of them to sit there blaming Democrats for the current map when they have managed to keep their entire party non diverse – where are their African-American legislators? They come to the table with tears in their eyes and pounding their chests when they have done the least to date to include diversity in their party.”

Midddlesex Democrats also point out that while there may not be any Latino freeholders in the sprawling county, there are two Latino representiatives on the all-Democrat board: Ron Rios and Blanquita Valenti. Others blame Diaz herself – a political neophyte when she landed in office – for not having the mechanical savvy to hold onto the 19th legislative seat in the face of an intra-party onslaught from Woodbridge Mayor John McCormac, who swapped in Craig Couglin as his Trenton representative for the double dipping Mayor Joe Vas once the Perth Amboy mayor/assemblyman went belly up.

Wisniewski’s Republican counterpart on the committee, Assemblyman Jay Webber, held his return fire, but welcomed Diaz, an independent Democrat – and public supporter of many of Republican Gov. Chris Christie’s initiatives – who upset Vas shortly before Vas plunged irretrievably into a corruption trial.

“We appreciate the mayor’s input,” Webber said of Diaz’s comments, “and we encourage her public input. This is why we wanted to have public input.” 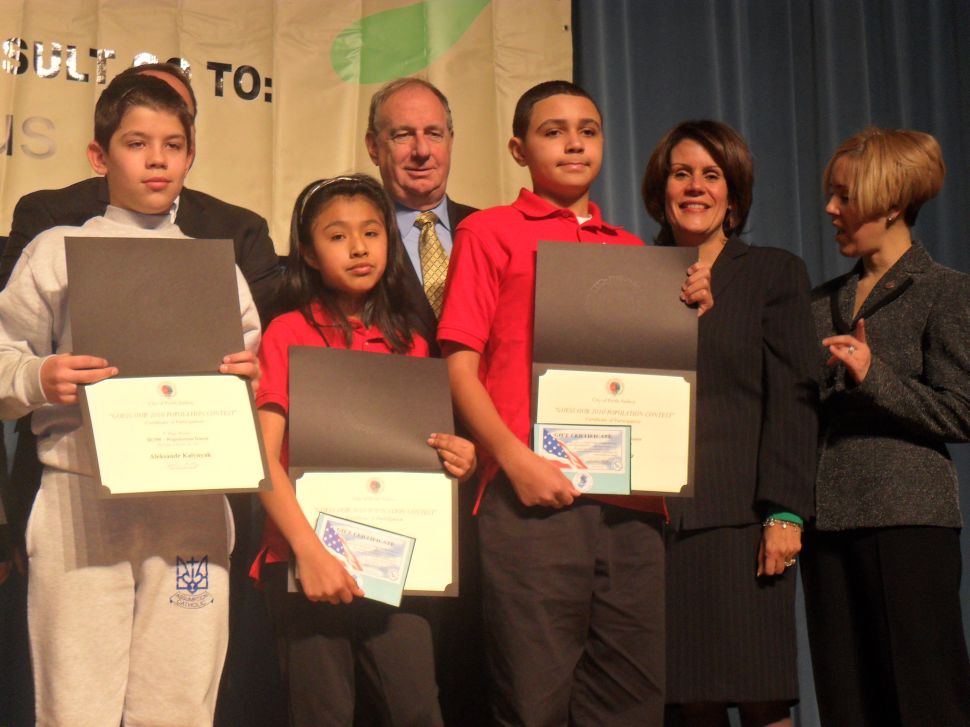