TRENTON – Once the governor introduces the budget, it’s the legislature’s duty to respond and ultimately pass a spending plan for the coming fiscal year.

It’s not the call, but the response that has a splinter cell of the majority caucus concerned.

Last year, the majority Democrats never actually drafted the response to Gov. Chris Christie’s first budget proposal – it was the minority Republicans who sponsored and drafted the final document.  “They were not responsible during this budget process last year,” said Assemblyman Joe Malone, (R-30), of Bordentown, who was the GOP budget officer in the Assembly last year.

“That was one of the reasons I stepped away from it this year…I was very much afraid that they were going to do the same thing again. I’m the one who had to work out the final deals with the Governor’s Office.”

This year, the majority leadership is on record saying, in unison: “This year is going to be different.”

But what that means exactly is in dispute.

Majority Leader Sen. Barbara Buono, (D-18), of Metuchen, is proposing the Democrats take a fresh piece of paper and draw their own budget with their own priorities, as is their right. “The budget is a moral document and these are our priorities enshrined,” she told PolitickerNJ  this week.

If the majority decides to scrap Christie’s proposal altogether and start anew, they can – and they’ll probably be able to pass it, forcing Christie to veto what he objects to.

They can even re-introduce Dem-favored initiatives like the millionaires’ tax, women’s health center funding, or a fuller funding of pensions, but whatever they include, they’ll need to balance the fiscal plan. Some sources even discussed pulling a page from Christie’s book and tying the millionaires’ tax to some GOP pet project or darling program – like the public employee health care reform and homestead credit bundle that the governor presented this week.

The problem is, Buono has only a few straggling supporters as the budget season opens up – some of whom sit on budget committees handling the document – but the rest of the majority leadership is noncommittal on the idea.

“We’re definitely going to be making changes to (Christie’s) budget,” Sarlo said, but he would not clarify what that meant. “It’s a long way to go. There’s a lot of ambiguity (in Christie’s plan).”

The Democrats also made changes last year, although they did so by negotiating with the Governor’s Office and relying on the Republicans to memorialize and own the final decision.

Malone, who has ceded his GOP budget role to Assemblyman Declan O’Scanlon, (R-12), of Little Silver, said yesterday, “I have never known the majority party to not sponsor the budget.”

Last year, he said, “We knew from the beginning that they weren’t going to do it,” but he said he never actually was given an answer by Greenwald.

The impact of Democrats on the budget last year, he said, was largely “insignificant:” of the $30 million to $40 million in changes, most were done alongside Republican legislators, for instance disabled assistance, tuition funding, and elimination of co-pays.

“It’s purely politics,” Malone said of the heavy criticism dumped on Christie by the Democrats, given that they passed up their chance to take the steering wheel. “It has nothing to do with good government. I don’t agree with the governor 100 percent, but at least he has the guts to do what he needs to do to.”

Malone said when the Dems started harping on an underfunded pension fund – aside from the fact that Democratic governors also skipped payments – it was merely lip service. “It’s just sad,” he said. “It’s pandering and it’s nonsense.”

This year, he’s asking for a different approach.

“If we are going to be the ones sponsoring the budget,” he said, “If the Democrats know they aren’t going to sponsor the bill, they ought to let Declan run the hearings.”

Malone said the hearings act as a tool for crafting the budget, allowing experts and interested parties to provide their opinions and recommendations.

But if the majority controls the meetings and the minority is crafting the budget, the hearings turn into a circus where the majority has control to mute individual protests and silence experts with opinions other than theirs, Malone said.

Assemblyman John Wisniewski, (D-19), of Sayreville, told PolitickerNJ earlier this week that the majority was reticent to take a strong stand on last year’s budget.

He understands criticisms of armchair quarterbacking but, like the rest of leadership, could not explain how the majority is going to change the process this year.

“Clearly we have to see the meat and bones of what the governor has proposed,” he said hours before Christie made his address on Tuesday.

For new state Sen. Linda Greenstein, (D-14), of Plainsboro, this will be her first upper chamber budget season. Even so, she’ll have a front row seat as a member of the Budget Committee.

She’s backing Buono, but isn’t in a position to sway the powerful panel yet.

“My preference would be for us to have a budget with our priorities,” she said, “once we set our priorities. And it does go along with how we pay for it.”

But such is the painful and harsh reality of budgeting.

Last year, State Sen. Loretta Weinberg, (D-37), of Teaneck, was publicly in favor of a majority-authored budget document. She was overruled by her peers, and this year she has Buono and Greenstein on board.

“I think we need a budget with our own priorities,” Weinberg said. “We have plenty of time (to do that).”

Her Assembly mate, Gordon Johnson, (D-37), of Englewood, sits on the lower chamber Budget Committee and is getting behind his upper chamber partner.

“I am for crafting a budget that reflects my priorities, my values,” he said. “I think this year will be a different game plan (in the Assembly).”

If it was up to Johnson, the Democrats would submit their own fiscal plan and let Christie use his veto if need be.

“I’m kind of skeptical in regards to that,” Schaer said Wednesday. Although the Democratic response to Christie’s budget may be “wholesale,” he said, “We need to avoid grandstanding and work in a bipartisan manner.” 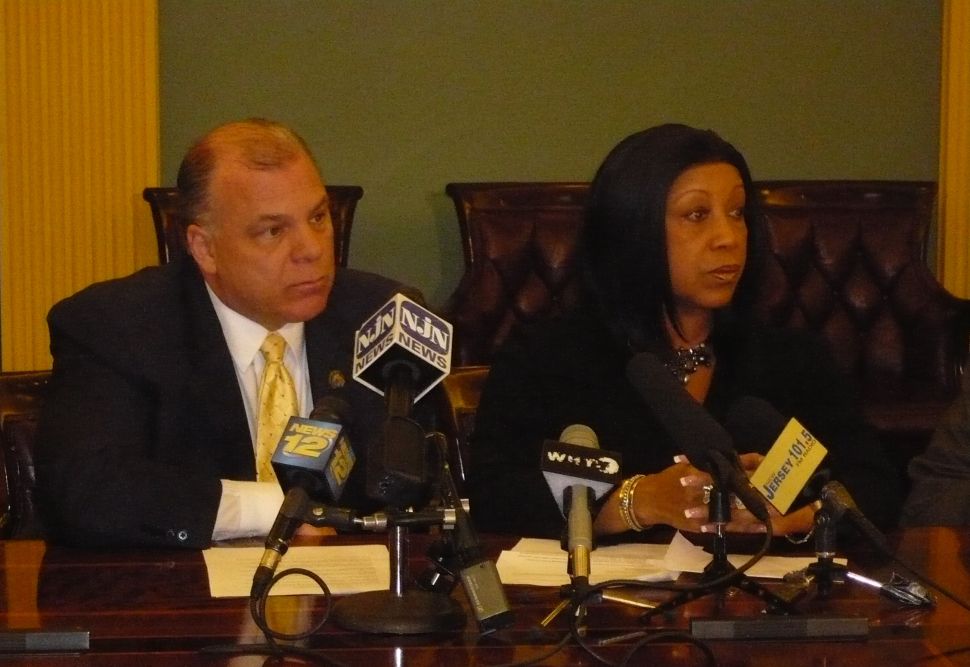