After a double digit beating last year at the hands of a popular Democrat, Republican Anna Little said she is “gearing up for 2012,” looking forward to running against 6th District Democratic Congressman Frank Pallone.

“This time, I’ll take him down,” Little said enthusiastically. “We made history.”

Little ultimately lost to Pallone in the November 2010 general election by 11 points, but carried Monmouth County, beating the incumbent by 4 percent.

But while Monmouth voters came out for her, Little, who is mayor of Highlands Borough, lost her own hometown.

“We need to stand unified and direct our union leaders to listen to the hard-working Americans,” she said while attending the rally outside the Statehouse Annex. “They need to represent, not dictate.”

About the protests by public employees in Wisconsin, which inspired the AFL-CIO to hold a union rally outside the Statehouse on Friday on similar issues, Little pointed out the big difference was that collective bargaining was not being discussed in the Garden State.

“I applaud (Gov.) Chris Christie for asking employees to contribute more toward their health and pension benefits,” she said. “The hard-working Americans won’t have a pension if this (the high cost) continues.”

Pallone, who was attending the union rally, would not comment, saying he would not know who his Republican opponent would be in 2012. “It’s two years away.”

Little, who was endorsed by the Tea Party, was the upset victor of a bitter primary, beating Millionaire publisher Diane Gooch, who also has not ruled out a run in 2012. 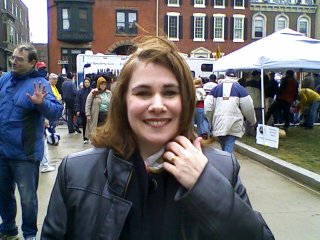