NEWARK – It happens finally: a slow uncoiling and then sudden strike.

Now, the most powerful non-elected official in New Jersey leans over a microphone and queries a Latino Action Network activist Christian Estevez, who wants greater Latino representation in the legislature.

“Do you know who represents Perth Amboy in the state Senate?”

“Do you know who represents Pleasantville?”

There are angry snaps from the crowd of “what does that have to do with anything?” but the unspoken point nails the room with the Republican argument. They are all white males in minority concern legislative districts.

It hammers into what Republicans see as the hypocrisy of Democrats who preach diversity, then stake white men into top elected posts.

Webber drills specifically down into the city of Passaic – over 70 percent Latino – which Sarlo represents in the Senate with no minority representation in the Assembly.

There’s a scrambled answer from Estevez.

“I look forward to him supporting some of the legislation I’ve put forward to help the city of Passaic,” he scraps in Webber’s direction.

Sarlo adds, “The first vote I ever took in legislature was to cast a vote for Albio Sires to be the first Hispanic speaker of this state. It went over very well in the city of Passaic.”

A Democratic Party insider, BlackBerry in hand, holds up this post in an earlier incarnation and mouths the word hypocrisy.

“How about Republican hypocrisy when they have no minority representation,” the insider gripes.

Assemblyman John Wisniewkski (D-Sayreville) later administers payback on a Republican apologist who tangles up when trying to talk about her issue.

“I don’t feel in Elizabeth we are well-represented when we have legislators who are pushing for laws that have negative effects on our Latino children,” she says, moments before she reveals that she lives in Linden.

The audience props her back up at one point when she saws away at Elizabeth Mayor Christian Bollwage.

“I don’t know that you could convince me ever that a white male could be sympathetic to my needs,” she says and there are grunts of affirmation at her back.

It turns out she’s Carmen Southward, an ally of the same Elizabeth School Board built by Rafel Fajardo in opposition to state Sen. Ray Lesniak (D-Elizabeth), some of whose other members sit on fold-out chairs in the room.

They are here to make the case against Cryan. 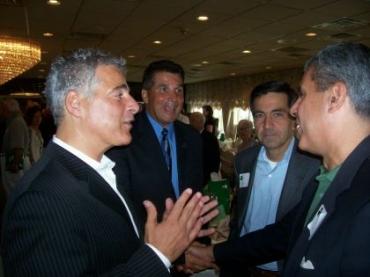