State Sen. Joe Pennacchio (R-Montville) shored himself up for a potential showdown with state Sen. Richard Codey (D-Roseland) as he dropped a bill to rescue the state’s pension system.

At least one redistricting map catapults Codey into Pennacchio’s district for a general election contest.

“There is no doubt the pension funds are in serious jeopardy,” Pennacchio said in a release. “More than five years ago, Governor Codey asked Phillip Murphy to investigate the ailing pension system. A few years later, the Senate and Assembly met in a special session to study the pension system further.

“Both the special session and Mr. Murphy’s panel identified the long-term fiscal issues facing the system.. Few of the proposed changes made by either party were ever adopted. There is no more time to study how to save the pension system. The health of the system today is at best precarious and if we do nothing, the system will default. The alternative to doing nothing would be catastrophic, to both retirees and taxpayers; we must not let that happen.  Retirees and taxpayers deserve better.” 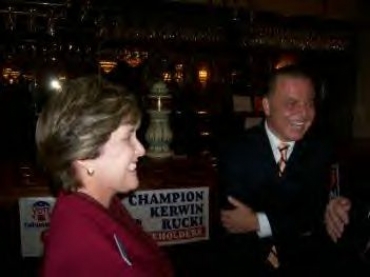