TRENTON – Schools Development Authority CEO Marc Larkins was invited to speak before the Assembly Education today, but try as the Democrats might to find out what the status of over two dozen school projects is, Larkins could not make it.

The SDA head told the committee in a letter: “Additionally, the review of the SDA 2008 Capital Plan is near completion and is expected to be reviewed by the SDA Board of Directors in the near future.”

“Once approved by the Board, I will be able to comment on the details of the projects as well as the review process,” Larkins wrote.

“Director Larkins’ refusal to come today because it was a quote-unquote inconvenient time is just unacceptable,” he said. “It’s been 13 months. The Schools Development Authority has done nothing – to our knowledge – virtually nothing in terms of the capital projects list which was developed…in 2008.”

Over 50 school projects were put on hold when Gov. Chris Christie took office last year pending the review and re-prioritization of all projects. Larkins explained to the committee last year that an audit report showed the previous administration at the SDA failed to fully vet 27 projects that were nonetheless approved.

Emergency school facility work is backlogged with dozens of requests, according to recent reports, many of which are attributable to the harsh winter weather.

The SDA lists six ongoing projects on its website, most of which were begun before the new administration came into office.

“Rumor has it that there has been a list (of school projects) that has been established in October that hasn’t been acted upon,” Diegnan said today. “All we’re looking for is transparency, accountability, and reporting where this mandated program is going.”

Today, SDA spokeswoman Edye Maier said, “The SDA’s internal working group completed its initial review in mid-October. This internal review then underwent a vetting process with SDA and (Department of Education) management. (The) SDA expects the full review to be completed and presented to the (SDA) Board in the near future.”

In his letter requesting Larkins’ appearance, Diegnan reminded the SDA chief that he promised the Assembly panel last year to return before February for an update.

“To date, no information has been provided,” he wrote. “It has been over one year since the Governor took the oath of office and no action has been taken on any of the designated projects in the capital plan. This situation is unacceptable and cannot continue.”

A month ago, the SDA unloaded 24 people, nearly 10 percent of its payroll, and indicated that more cuts may be coming. Many Democrats were and still are criticizing the authority for carrying a 300-person payroll, while very little work is being completed.

Last year, NJ Spotlight reported that nearly 50 of those employees earned over $100,000.

“We haven’t had an update in a long time,” said Assemblywoman Joan Voss (D-38) of Fort Lee today in committee. “I get calls from schools saying, ‘When will our projects be started,’ and (asking for) any update that we can possibly give them.”

Voss addressed payroll briefly, too. “In the last year or so, the salaries for the (SDA) were over $50 million and no work has been done. And so, that I find somewhat disturbing…If people are collecting salaries, what work are they doing?”

The SDA was created in 2007 to satisfy the Abbott decision court order for state-funded school facilities in special needs districts.

The original agency in charge of fulfilling the court order, the Schools Construction Corp., was disbanded following a 2005 inspector general report that found “waste, fraud, and abuse of taxpayer dollars.”

Voss stressed the need for information flow, even though several Democratic sources said the school projects list will be kept close to the vest by the SDA until Christie’s budget is introduced.

“We need to be appraised of what’s going on,” she said. “Many projects have been promised to be started, and this has not occurred.”

Diegnan said today, “So we’re going to try again. Hopefully this time we get cooperation. I hope that Mr. Larkins will find time in his busy schedule to be here next time we ask him.” 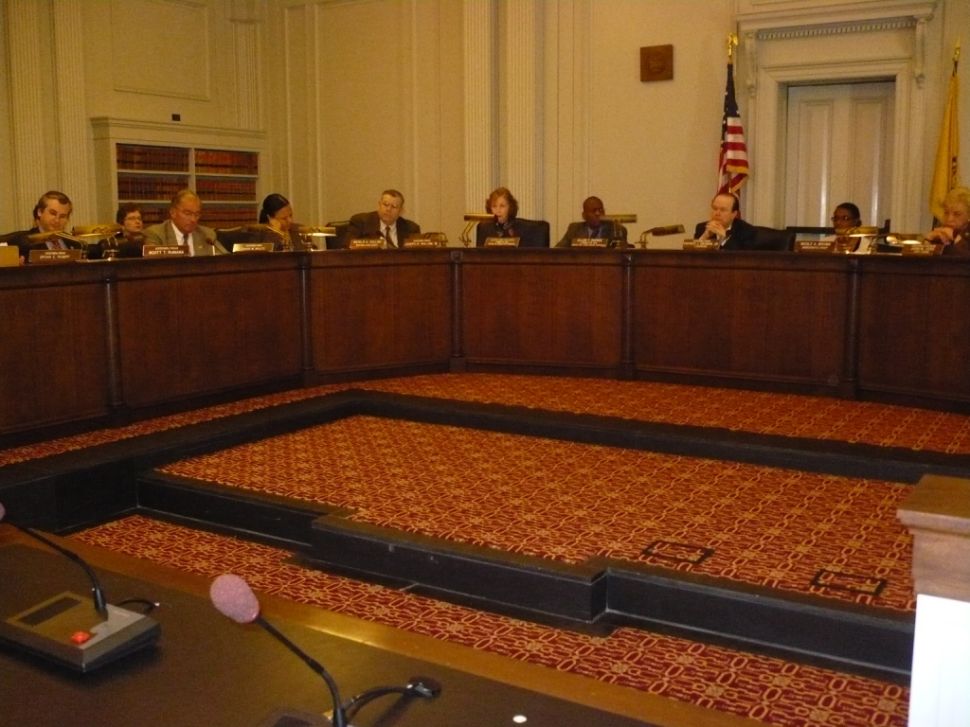