Every member of the state’s congressional delegation Tuesday signed a letter opposing federal efforts to collect $271 million from the state for repayment of funds for the Access to the Regions Core tunnel, halted by the governor last year.

Each of the 13 members of the U.S. House of Representatives along with both U.S. Senators signed the letter to U.S. Department of Transportation Secretary Ray LaHood opposing repayment of the money already spent on the ARC tunnel.

“While some of us may differ on whether or not the ARC project should have been cancelled, we are united in our effort to protect New Jersey taxpayers from harm,” the letter to LaHood said. “We are deeply concerned that forcing New Jersey to pay these funds will undermine efforts for a new Trans-Hudson tunnel, and require the State to postpone or cancel other essential, job-creating transit projects throughout the State. This will only exacerbate the State’s transportation and economic challenges, and impose an unfair burden on taxpayers in New Jersey.”

In a release Tuesday, Christie lauded the bi-partisan effort to halt the government’s effort to collect the money.

“I applaud the bi-partisan support of our entire Congressional delegation and thank them for their commitment to protecting New Jersey taxpayers from the Federal government’s unreasonable demand,”  Christie said.  “No matter our differences at times on the ARC project, we can all agree that the federal government’s demand represents an unfair burden on New Jersey taxpayers.”

Federal officials demanded repayment of the money in November after Christie stopped work on the tunnel citing projected cost overruns.  Christie disputed the bill saying the state was being held to a different standard than other states that had cancelled projects that had used federal money.

The state had until January 26 to pay the money back, but the deadline came and went with no repayment.

View the letter from the delegation below. 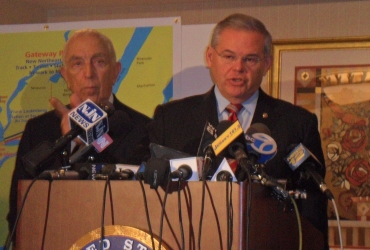