Despite expecting some pushback from unions, labor organizations, and lawmakers, state Sen. Stephen Sweeney, (D-3), of West Deptford said the  comprehensive health insurance plan he proposed is fair, basing the amount workers pay on their income and providing more options.

“People are going to pay more,” Sweeney said upfront in a Tuesday afternoon press conference at the Statehouse. He envisions providing at least five health plans from which the estimated 510,000 state and local workers could choose. That is more than the three plans currently provided.

However,  Gov. Chris Christie said Sweeney’s plan is a good start, but it still needs work.

Sweeneys’ plan has a sliding pay-in scale based on employee salaries, whereas Christie is looking for employee contributions to begin immediately and evenly across the board.

“I am really grateful that the Senate President has come forward with his plan,” Christie said. At first glance, “I’m encouraged,” Christie said, later adding: “It’s not nearly as much reform as we need.”

He said whatever reform is approved, it must be long-term. “We should not endure this battle – and that’s what it’s going to be – for a quick fix,” Christie said. “I recognize, especially with a Democratic legislature, compromise is going to be needed.” 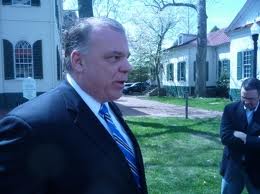