Despite expecting some pushback from unions, labor organizations, and lawmakers, state Sen. Stephen Sweeney said the comprehensive health insurance plan he proposed is fair, basing the amount workers pay on their income and providing more options.

“People are going to pay more,” Sweeney said upfront in a Tuesday afternoon press conference at the Statehouse.

He envisions providing at least five health plans from which the estimated 510,000 state and local workers could choose from. That is more than the three plans currently provided.

Also, the state health benefits plan would be off limits to new workers. The amount workers would pay would depend on their income.

Sweeney added the plan would relieve one of the largest drivers of high property taxes, and is fairer than Gov. Chris Christie’s plan that calls on all workers to pay 30 percent of the insurance premium, regardless of income.

Sweeney’s plan also calls for boards to be set up in local governments. Sweeney called Christie’s plan “unfair to low- and middle-income workers.” He added that many residents who foot the bill for public employees currently lack health insurance and he understands their frustration. He dismissed criticisms that residents are jealous. “They’re not jealous,” he said. “They’re hurting.”

The Senate leader said health insurance for public employees is a subject he tried tackling in 2006, amid much backlash, and has only seen the subject become “gravely worse” in the past half-decade. “We have to fix it and fix it now.”

He expects a tough fight with labor leaders and fellow lawmakers,adding that he’d like to see resolution by June 30. “This is not going to be a cakewalk,” he said.  Sweeney cautioned that if the state health insurance situation is left untouched, “we will continue to see the state’s economic future deteriorate.”

William Dressel, head of the N.J. League of Municipalities, issued a statement.

“We commend Senator Sweeney for his attention to the large and growing impact of health insurance costs on municipal, county, school district and State budgets, and on our property taxpayers. We will carefully review the specifics in the bill, as soon as it becomes available.” 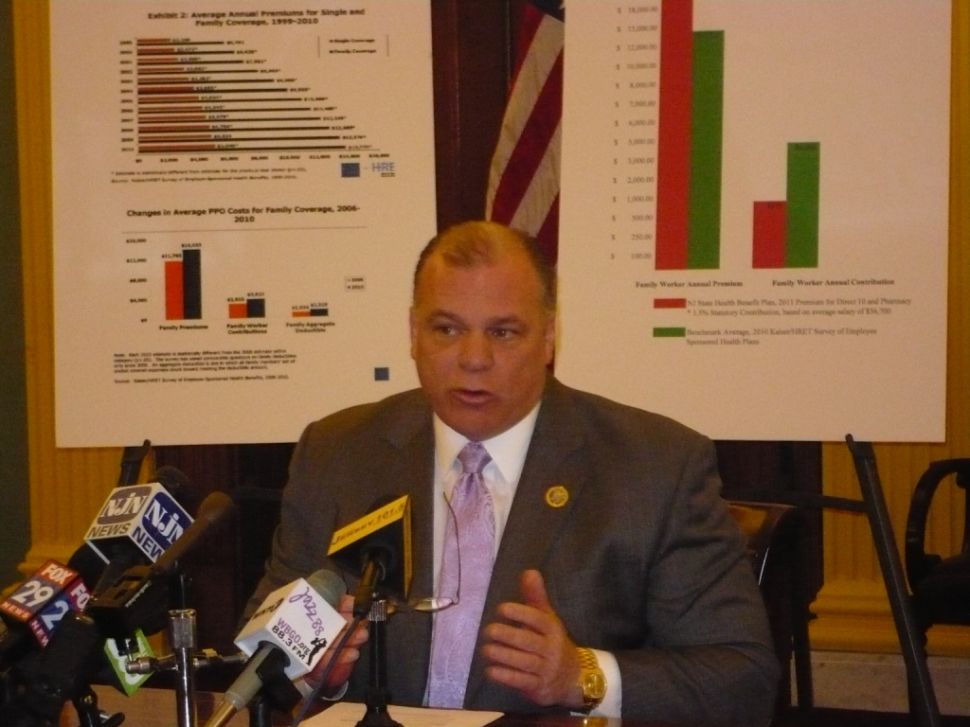