TRENTON – Gov. Chris Christie plans on continuing to use the sales tax revenue from the Urban Enterprise Zones for the state’s  general treasury to help close budget gaps.

Spokesman Kevin Roberts said the estimated $90 million the UEZs are anticipated to generate will be used to help close the budget deficit.

Previously, the money that was collected by the UEZs, which are shopping districts that charge only a 3.5 percent sales tax instead of 7 percent, was put into Zone Assistance Funds that could be used for loan programs, beautification, and road projects, among other things.

There are 37 UEZs located in 32 municipalities, according to the Department of Community Affairs. They include Newark, East Orange, Phillipsburg, Vineland, Bayonne, Asbury Park, Pemberton, and North Bergen, among others.

“UEZ funds are critical to the survival of dozens of communities that rely on the program to spur redevelopment and fuel economic growth,” Sen. Jeff Van Drew, (D-1), of Cape May, said in a statement.

“Ending the UEZ program as we know it would absolutely devastate municipalities in our region that are still struggling to recover from the economic recession.”

Van Drew is considering holding a hearing on the UEZ program.

Mayor Chris Bollwage of Elizabeth, who also is chairman of the UEZ Mayors Council, said the city had received an average of $9 million each year in UEZ funds. The money was used for low-interest loans, facade construction, and police officers, among other items. Some of the money was also used toward constructing the Jersey Gardens Mall.

“He says he is all about helping businesses, but his actions suggest otherwise,” Bollwage said of Christie. “Words can’t explain his hypocrisy.”

Bollwage said continued diversion of UEZ funds could eventually lead to its demise. The UEZ program, which is run by the Department of Community Affairs, was created in 1983.

He said he will meet with other mayors and UEZ coordinators to garner support for returning the funds to their respective communities.

Yves Aubourg, coordinator of the UEZ in Hillside, Union County, said in prior years, the money collected through the UEZ’s reduced sales tax helped fund relocation grants, which helped move businesses coming from such places as New York.

The money also went toward police services, street sweeping and road construction projects. Aubourg recently had to let go of a secretary who handled some of the administrative aspects of the program.

While he is disappointed with the planned diversion of funds, Aubourg said, “I’m just hoping the UEZ will stay alive.”

The change to the UEZ program was one of the action items listed in the Fiscal Year 2012 budget that was released Tuesday. It was listed under the “Make Tough Choices” heading.
“Eliminate New Funding for Urban Enterprise Zones,” the item stated. 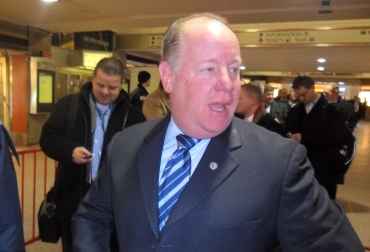