Say what you want about West New York Mayor Silverio “Sal” Vega, but don’t say he gets pushovers for opponents.

Not to compare relative political neophyte Dr. Felix Roque to state Sen. Brian P. Stack of Union City but anytime you throw combat boots into the picture, you’re generally looking at a guy who doesn’t mind wading into the fray, and whatever he lacks in terms of Stack’s organizational power, Roque tries to match in the way of lust for battle.

“It’s looking good,” said Roque, an Army colonel and director of pain management at St. Mary’s Hospital in Passaic, ready to lift off early next month. “In less than two days, we’ve collected more than 250 signatures. People are just upset. I can’t tell you how many people have come up to me and told me, as they signed our petition, that they just want to get the bum out of here people.”

People who earlier announced their individual runs for mayor look now like they will fold in behind Roque to challenge Vega’s team.

Running for his second full term this year after the infamous beat-down from Stack that pushed him back into the confines of West New York after he attempted to double dip his way into the hearts and minds of the entire 33rd District, Vega last night held a rally at Las Palmas, where he angrily answered to some of Roque’s persistent charges.

“This is an executive who’s made the same tough decisions that are being made all over the nation,” he said. “The total tax bill has been completely frozen for two years now. He fired the former CFO, who was a disaster. He reduced the town budget by over a million dollars, and reduced the municipal work force by 25%. There are 100 fewer employees now than there were when Sal became mayor.”

Swibinski said all five incumbent commissioners formally indicated last night that they intend to run again, and not that he broke out Commissioner Gerald Lange, but others say the newsflash there is that the crew didn’t dump him – or at least not yet, as Lange weathered a small-bore fender bender/hit and run last year that scraped some paint off the team brand.

A wired-in ally of the beaten up but still-standing Democratic Party establishment in Hudson County, Vega has the support of U.S. Sen. Bob Menendez (D-Hoboken), according to Swibinski, and enjoys strong relations with Hudson County Executive Tom DeGise and state Sen. Nicholas Sacco (D-North Bergen).

Stack tolerates him, and U.S. Rep. Albio Sires (D-West New York) evidently is not a big enough fan to endorse him, a move Vega’s allies are soberly trying to say is the congressman’s statesman-like decision “to stay out of it.”

As for the renegade senator from the 33rd District and Vega, following Stack’s 2007 demolition of the mayor of West New York in their legislative showdown, the two men established working relations that run somewhere along the lines of Stack every once in a while reminding Vega that Vega’s only as big as Stack wants him to be, which works – or has to, given Stack’s virtually unbreachable status in a town he won in a mayoral re-election last year by 10-1.

Having failed to secure a recall election of Vega in 2009, which cost him $150,000 and which he said he would do again because it was the right thing to do, Roque can’t match that organizational strength, obviously, and he can’t summon an endorsement from Stack or Sires, but he’s careful to respectfully build up both men.

“I accept whatever guidance Congressman Sires can give me because he is an honorable man,” Roque said.

Would he favor a Republican plan to redistrict West New York into the 32nd District to create a majority Hispanic legislative district?

“Leave the district the way it is,” Roque said. “Stack is doing such a phenomenal job. Leave it alone. If it’s not broken, why fix it? If they changed it, it would mess things up. Only with Mayor Stack have we seen Hispanics being put into key positions.”

On this point, at least, he agrees with the public position of Vega’s allies, who have learned the hard way what it means to lowball Stack.

But the agreement ends there.

“Doctor Roque’s been around driving his Bentley around, probably out there getting his petitions,” said Swibinski, tweaking Roque’s patrician set of wheels. “I would hope that he’d do a better job collecting petitions for the mayor’s race than he did for the recall.”

“All of the commissioners have taxpayer-funded cars,” Roque said. “You won’t find me taking a publicly paid-for car to the Mall at Short Hills.” 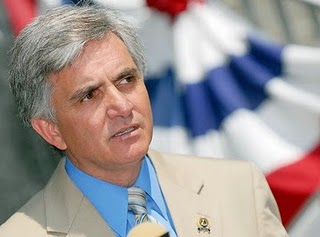