The state chapter of the American Association of Retired Persons is playing hardball in its opposition to the telecomm deregulation bill pulled from the Senate board list this afternoon, warning senators that their votes on the measure will be broadcast to the association’s 1.3 million state members.

In a letter sent to all 40 senators Friday, the AARP warned that the vote was considered an “AARP key accountability vote,” with the roll call sent out via newsletter, email alert, press release, social media and mass mailing to every member.

The letter was accompanied by a copy of a press release the organization planned to send to state news outlets in the event the bill was approved.  The release outlines the AARP’s opposition to the measure as well as a call to seniors to hold those legislators who voted “aye” accountable.

“We are extremely pleased certain of our State Senators sided with consumers when they cast their vote against this bill and greatly disappointed in those that did not,” said Sy Larson, AARP New Jersey State President in the release. “We encourage all our members to take an active role in holding each legislator accountable in the next election cycle this fall.”

AARP Governmental Affairs Manager Douglas Johnston said Monday the “key accountability vote” designation is used sparingly and only for those issues that will have a direct impact in senior citizens.

“We designate very important votes very rarely, Johnston said, stressing that the AARP is non-partisan, does not operate a PAC and does not endorse candidates.  “But this is a bottom line financial issue for low-income seniors.”

In this case, Johnston said, the deregulation of landline phone service will hit low-income seniors the hardest.

At least one Democratic source said the Senate was taking the threat to heart and talk in the caucus prior to the tabling of the bill included potential amendments to aid seniors.

Democrats say they are already feeling heat from their base with the introduction by Senate President Steve Sweeney, (D-3), of West Deptford, of a bill that would rein in health benefits for state workers, forcing them to pay a greater portion of their premiums.

Mid-term elections are approaching with all 120 seats up for election in November. 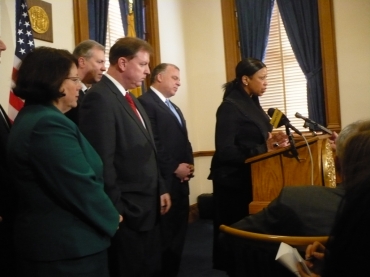