Based on his showings at the North Jersey Republican Organization (NERO) convention and before the party’s policy committee, East Rutherford Councilman Joel Brizzi never looked like he’d be in jeopardy of getting cold cocked.

Everyone – or at least almost everyone – liked him as he sewed support among conservatives and moderates alike.

But the nagging issue all along regarded a contest for that second freeholder seat, which turned late into a slugfest between Jeff Bader, a councilman from Woodcliff Lake and Anthony Rottino, a businessman from Franklin Lakes, and which Rottino ultimately won by 50 votes while dinging the fragile Bergen GOP establishment in the process.

Rottino was the outsider, while Bader had the support of Bergen Chairman Bob Yudin, state Sen. Gerry Cardinale (R-39) of Demarest, Bergen County Executive Kathe Donovan and GOP strategist Alan Marcus, an uneasy alliance with the first two solid with each other and the latter two just about as solid.

Bader also carried the irritating stigma of having backed Bob Menendez for U.S. Congress, a fact that clung like a political carcass to his candidacy through each hoop of Republican events.

“Anthony is a hard worker and a proven fund raiser,” the legislators wrote in a letter to committee members. “He was an invaluable part of the winning Republican Freeholder team last year that gave Republicans a freeholder majority this year.  …As a business owner and entrepreneur, Anthony Rottino knows how to make difficult, bottom line economic decisions – the kind of decisions Republicans must make in order to cut taxes, shrink government and win the support of Republican and tax-sensitive Independent voters.”

As Yudin worked with Marcus and Donovan to propel Bader into the winner’s circle, the chairman’s kitchen cabinet rebelled, according to a source, and threw their support to Rottino.

The chairman today took the whole evening in stride.

“That’s what makes the Bergen County Republican Organization unique,” he said. “We had over 700 people there last night. We’re a democracy. This is not a Joe Ferriero event where you open up the meeting, you have 15 minutes and then you say who won.”

So the Bader alliance fell apart. Yudin at the end of it could say at least that he tried.

“I’ve spent my entire time as chairman trying to get everyone to work together,” he said. “We’re all united behind our candidates. And I should add, since I’ve been chairman, we’ve been winning.”

Cardinale had told people who asked him to vote Brizzi and Bader.

Like Yudin, he ended up getting it half right.

“”They made their own judgments,” the senator said of the committee in the end. “The candidates get tested. It was not a blowout. If 30 people made a different choice, you’d have a different result. And we’re talking about 700 plus people there last night. This just shows that we can have a debate. We can have a process. The candidates who lost declared their support for those who won.”

Sources say Cardinale liked Bader’s people skills and the fact that he served in public office.

“The hallmark of Yudin’s chairmanship has been unity,” Cardinale said. “He’s buried the hatchet, and preached unity.”

If Brizzi and Rottino win the primary they could face Democratic Freeholders David Ganz and Bernadette McPherson in the general election.

One GOP insider said not to be discounted here is the influence wielded by DiNicola, who’s now in her first year on the freeholder board.

“She is a rock star,” said the source. “Greatly underestimated by the old curmudgeons… She has been running paces around old timers up there since elected mayor of Franklin Lakes in 2006 knocking out 20 year incumbent. They tried all they could to stop her from becoming freeholder last year too, but of course, will try to credit themselves for it now. Unlike others, she has no major beefs with Kathy despite being on opposite side of this fight. She is the clearing house between the conservative wing and Kathy wing of the Bergen GOP, although the lines are not always perfect drawn.” 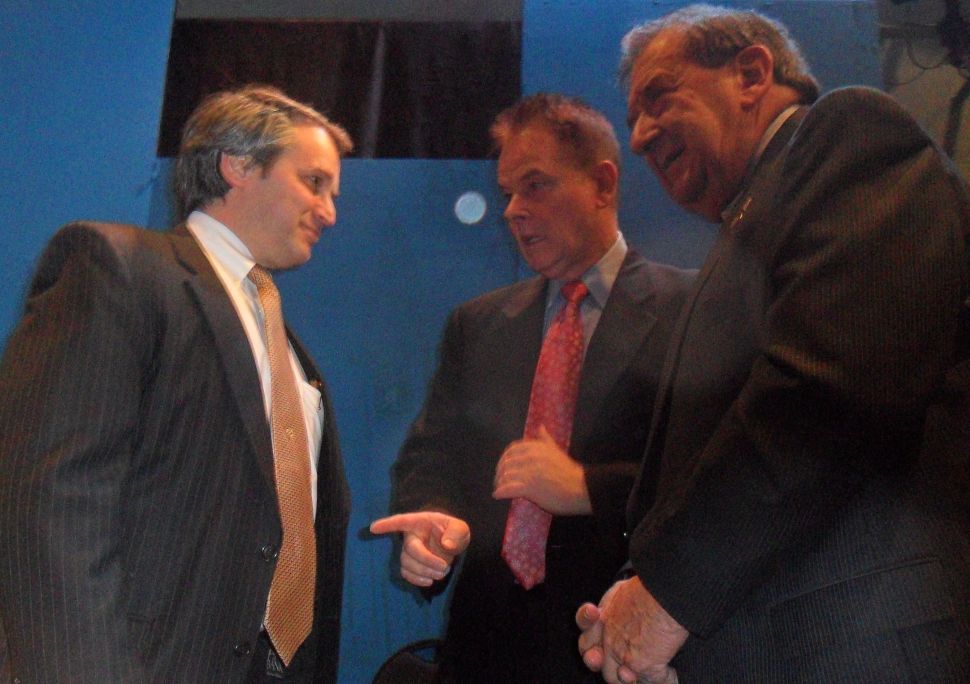