NUTLEY – It was eerily quiet at the start of this Town Hall meeting while former Highlands Mayor Anna Little and others waited onstage and Gov. Chris Christie’s staff began clearing the back rows of empty chairs and stacking them in a corner.

Former Assembly Majority Leader Paul DiGaetano stood in the other back corner.

“It all depends on redistricting,” said the Nutley pol, who has already fundraised as a GOP challenger to 36th District state Sen. Paul Sarlo of Wood-Ridge.

“If the Democratic map prevails, I’ll be in Newark,” DiGaetano added, pausing dismally for the cymbal clash.

Such an outcome means he wouldn’t run.

But other map configurations might throw him into the race.

The former GOP legislative leader who found himself outside the machinery of Chris Christie country when he sided with Steve Lonegan in the 2009 gubernatorial election, DiGaetano’s ready to run – if he has a shot to win. A Republican in a Newark district would be like Joe Cryan in Warren County.

“Considering the financial issues that are facing us all, these changes have to be made,” said the exec.

In his speech, Christie told residents that his pension reforms would save them $10.4 million.

“Imagine what $10.4 million will look like in your property tax bill,” the governor told the Nutley crowd.

“I’m not doing these things because I’m looking for more fights,” the governor said. “We can’t any longer try to make everybody happy. That is leading us down the road to fiscal ruin.”

As part of his ongoing statewide town hall tour, the governor appeared in the Frank Cocchiola Recreation Center (named for the father of the current mayor) accompanied by his wife, First Lady Mary Pat Christie, DiVincenzo, and Republican state Sen. Kevin O’Toole of Cedar Grove. Absent from the event was former Senate Majority Leader Carmen Orechio, chairman of the North Jersey District Water Supply Commission (NJDWSC), which Christie pounced on last week in forcing the back to back resignation of two commissioners.

Orechio is the dean of Nutley politics.

The issue came up when an audience member asked the governor about his reform of the Passaic Valley Sewerage Commission.

“The executive director of the (NJDWSC) was quoted in the newspaper saying how dare he (Christie) tell us what to do, he’s not our boss,” the governor said. “Okay.”

“This is when it’s good to have someone who gets as ticked off as I do,” Christie said. “We’re going to take control of that authority as well. …We’re riding herd on that shadow government.”

Another man rose, described himself as a Christie supporter, then sobered the crowd.

“You cut $174 million in higher education funding,” said John DeFilippis, a self-identified proud native New Jerseyan and Republican. “Those cuts cost me my job. For the last five months I have been unemployed. I’m getting crushed by the astonomical cost of living here.”

He may have to leave his beloved state. Later, he told PolitickerNJ.com he may run for office.

“You’ve just heard the ugly reality of irresponsibility,” Christie told him when the two men faced each other. “I think you know by the tenor of your question that I did what I had to do. This is the tough medicine we have to take. If we don’t there are going to be scores more of people threatened with leaving our state. I hope you find a place to work in our state because I’d love to keep you.”

Later there were subdued groans when the governor said, “I have an Irish father.”

He added with a laugh, “I knew that would get a low level of response in Nutley.”

Christie pawed oratorically at the turf for a second or two, riding his timing as observers digested the faces and the names (DiVincenzo, Cocchiola, DiGaetano, etc) in the room.

Then he went for the kill shot.

“I had a Sicilian mother,” the governor announced. 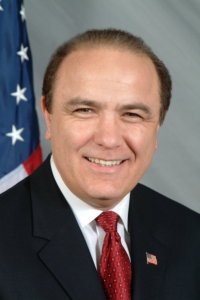