A little-known fact about state Sen. Jennifer Beck, (R-12), of Red Bank: she’s not afraid of the fray. Well, maybe it’s known, but by putting her name at the top of S2718, Beck is stepping in between the state’s two political heavyweights and positioning herself at the center of a pivotal debate over how and when public employee health care reform will happen in New Jersey.

According to some figures, the average state public employee pays only 22 percent of the annual health care costs that an average American pays, $900 compared to $4,000.

In one corner, Gov. Chris Christie is asking for contribution hikes over three years that includes retirees. In the other corner, state Sen. Steve Sweeney, (D-3), wants a seven-year rollout of increased contributions that does not include retirees.

The question of whether to include the over-100,000 current government retirees with fully-paid health care is significant. The answer seems to be based on untested legal ground that Christie and Sweeney are taking opposite approaches to: Christie believes that benefits are guaranteed to these retirees, while contribution requirements are flexible; Sweeney believes both are legally untouchable.

The Senate president unveiled S2718 in a solo act of legislative muscle-flexing in February – without another Democrat in sight – a week before Christie took the podium in his budget address.

Sweeney told State Street Wire on Friday that he believes his bill splits the difference exactly between the Dems, some of whom are tightly allied with the public unions, and Christie’s GOP entourage, who are trying to take back control of state benefits.

On Feb. 22, the importance of the health care reform bill increased dramatically when Christie announced he was bundling reforms and incentives in the budget address. Health care was handcuffed to homestead tax credits and pension with state pre-payment of contributions.

This dance between Sweeney and Christie continued on Monday, when Sweeney told the Asbury Park Press Editorial Board that he wasn’t allowing the health care or pension reform bills to hit the floor for a vote unless he had a guarantee from Christie that the governor wouldn’t veto one and sign the other.

Enter Beck, who wants to bridge the gap on health care, while prodding the pension debate in Christie’s direction.

“It’s substantive and thoughtful,” Beck said of S2718 on Tuesday, but she isn’t sold on the particulars. In fact, she’s proposing specific changes: 1. A compromise on the rollout timeline, and 2. Inclusion of retirees.

She and Sweeney are sitting down this week to discuss the amendment proposals.

“Many of us feel it’s a really good start,” she said. “I’m not sure a seven-year timeline gets us to where we need to be in terms of savings.”

Both Sweeney and Christie agree that the state needs more health care plan options, and incentives or disincentives to ensure workers are being cost-conscious – which is why their contributions will be tied to the premium for the plan they select as opposed to a percentage of their salary.

“Plan designs are generally very generous and out of step with the marketplace,” Beck said. “I think the Senate president did a good job in crafting the bill that way.”

Sweeney’s plan also creates salary tiers that require less of a contribution for employees who take home less pay, which was not a part of Christie’s proposal. Beck likes the idea.

The amendment she’s most inclined to is the inclusion of retirees.

“We’re trying to (find savings) this budget cycle,” she said, but it will be hard, especially since the reforms will not go into effect for current employees until their collective bargaining agreements expire. Therefore, excluding retirees will eliminate upfront savings almost entirely.

“It is an enormous cost. That is something that we have to think through,” Beck said. “There really is no case law to guide us with what is allowed and not allowed.”

Sweeney said that he welcomes further discussion with Beck on this issue.

“But the matter of retirees with more than 25 years of service is a legal matter that could jeopardize the process of structurally reforming the system.  We do not want to be tied up in court on this issue,” he said.

“We want to be implementing this sweeping reform so that the taxpayers of New Jersey will receive hundreds of millions of dollars in savings, local officials will have the ability to rein in property taxes, and middle and lower income workers will be treated in a fair manner.”

Beck said of the bill, “It is certainly much more substantive than the pension proposals that have been put forth by the Democrats.”

She’s referencing another Sweeney proposal, S2696, which has a much bigger chasm between it and the governor’s idea of pension reform than the competing health care proposals do.

Sources believe this is why Sweeney is tying his two reforms together, to find common ground and immediate savings on health care and force the governor’s hand into signing less-than-optimal pension reform.

Even so, the Republicans will take a Democratic cry for labor-cost reform any way they can get it.

“I think it is revolutionary that we have the leadership of the Democratic Party calling for pension and benefits reform,” Beck said today.

In 2006, she said, a package of 90 reform proposals was put in front of Democrats and only 14 were heard by committee. Only eight bills passed, Beck said, because the governor and legislative leadership were “actively involved with stopping the bills.”

With this turn from Sweeney and the occasional synergy he finds with Christie, Beck said, “It’s positive news for the taxpayers in New Jersey.”

She credits Sweeney not for coming around on the reforms, but for standing up in favor of them back in 2006, when most of his party was nowhere to be found.

“He was part of the bipartisan group of Democrats that recognized that the system that exists today is not sustainable,” she said, and with the mind that the state had “moral obligations” to uphold for the retirees and employees.

This time, Beck believes the Dems might come around.

“I think you will find within the Democratic Caucus a number of members who will support this reform,” she said. And with her proposed amendments, she said the GOP should green-light it as well.

“I do think you’ll find support within the Republic Caucus with these changes,” although she couldn’t say whether that support rests on the inclusion of retirees or not. “Because the bill has not yet come before us, the discussion has not been that focused.”

In some form, she expects public employee health care reform to be enacted before June 30, passed in both houses and signed by the governor.

That’s not the end of the road for her.

Hearing the objections of unions over the other side of health care costs, she is working on reforms that will help lower costs for health care providers.

Monday, she and state Assemblyman Herb Conaway, (D-7), of Delanco, found Assembly Health and Senior Services Committee passage for their “modest” tort reform, as Beck put it. Their bills, S760 and A1982, are still both committee-bound.

“Executives and trial attorneys are making so much money off the health care system,” the unions tell her. “(We have) to be taking a global view of what’s happening in Trenton.” 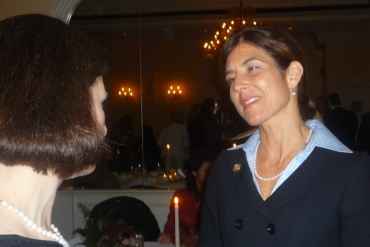