A Benenson Strategy Group March 18 poll commissioned by a coalition of labor and circulated at the Statehouse on Monday among Democratic Party legislators shows the majority party clinging to a 2-point legislative lead over the GOP in the minds of New Jersey voters.

While Democratic leaders shuffle between going toe to toe and toe to heel with Republican Gov. Chris Christie over pension and benefits reform and the budget, Democratic and undecided voters both say it is more important to protect priorities like schools, police and firefighters than to cut state spending. Democrats prefer protecting priorities over cutting spending by state government by a 60-point margin, while undecideds favor the priorities argument by a 5-point margin.

Here is the poll obtained by PolitickerNJ.com:

“Democratic members of the New Jersey Legislature have plenty of reasons to be concerned about the upcoming elections. Their top priority, however, should be appealing to the electorate that will hear their arguments. Currently, 40 percent of likely 2011 voters say they will vote for Democratic candidates for the legislature (a narrow 2-point lead over Republicans). And another 22 percent are still undecided. While Governor Christie has clearly enjoyed a prolonged honeymoon, his personal popularity has not fully translated into votes for Republican candidates on the ballot this November. In fact, the vast majority of voters who will vote Democratic, and a substantial number of undecided voters are not sold on key points of Christie’s agenda.  These groups should be considered the primary group for Democrats to talk to in the coming months, and they are not likely to be won over by a platform that merely follows Christie’s agenda.

DEMOCRATS START WITH BASE OF 40%; 22% UNDECIDED

Democrats hold leads across traditional base subgroups too, winning women by 7 points, less wealthy voters (<$75K/year) by 11 points and African Americans by an 89%-6% margin.  Democrats are strongest in the North-Central region (+37), and the Northeast (-5), Central (+7) and Southern (-6) regions can all be considered battlegrounds.

DEMOCRATIC AND UNDECIDED VOTERS’ SEE JOBS, NOT THE STATE BUDGET, AS THEIR TOP PRIORITY

When it comes to likely undecided and Democratic voters, Republicans and Christie have created an opening by leading with the state budget as their top issue.  In fact, jobs are more important than the budget to both Democratic and undecided likely 2011 voters.  Democrats place education as the second (24%) most important issue legislators should be dealing with, and the state budget comes in third, tied with taxes (12% each).  While undecided voters place the budget second, far fewer undecideds than Republican voters say it is the most important issue.  (26% undecideds vs 40% Republicans).

Consistent with findings about their view of the most important issues, Democratic and undecided voters both say it is more important to protect important priorities like schools, police and firefighters than to cut state spending.  Democrats prefer protecting priorities over cutting spending by state government by a 60-point margin, while undecideds favor the priorities argument by a 5-point margin.

Gov. Christie and Republicans in the legislature are busy trying to make unions and their members the scapegoats for the state’s budget problems.  But data suggests that this is a strategy that could backfire on them badly in the 2011 elections.  Unions are net favorable with Democratic voters by a 50-point net margin or more depending on question wording.  Among undecided voters, 34% have a favorable impression of labor unions, 38% of teachers’ unions and 44% are favorable toward public employee unions.  In fact, politicians who fail to separate themselves from parts of Christie’s agenda could be in danger.  For example, all voters are more likely to blame underfunding of the states pension fund on the politicians who passed tax cuts for the wealthy instead of contributing to the state pension fund.

Both Democratic and undecided voters say unions are “a good thing” and that “they make sure employers provide good wages, benefits, and a safe work environment.”  Democratic voters support unions by a margin of 83%-11%; undecideds by a 6-point margin.  Over a quarter of Republican voters also agree with this statement over one that says unions drive up the cost of doing business in New Jersey.  Democratic and undecided voters are also clear that they oppose any efforts to eliminate unions: Democrats by an 86%-11% margin, and undecideds by 64%-30%.  Republicans are split down the middle on this issue 47%-46%.

While there are no serious proposals on the table today to eliminate unions, the positive feelings toward unions among Democratic and undecided voters carry over to specific issues on the Christie agenda.  By a large margin, Democratic voters opposed every item of the Christie agenda we tested, including a proposal to eliminate tenure for New Jersey teachers.  School vouchers and attacks on public employees’ ability to bargain over pensions and health care benefits were especially troubling, with Democratic voters opposing them by 15 and 23 point margins respectively.  School vouchers ranked as the most negative aspect of Christie’s agenda among undecided voters 44-point net opposition.  Eliminating teacher tenure was more popular with undecided voters, but 30% of undecideds still opposed eliminating tenure, and 42% opposed the plan when it was pointed out that tenure protected teachers from arbitrary firing.

THE DEMOCRATIC BASE REMAINS OPPOSED TO THE CHRISTIE AGENDA

In addition to the views of Democratic and undecided voters outlined above, it is worth noting that two large blocs of traditional Democratic base votes also remain strongly opposed to the Republican agenda:  Union members and registered Democrats.

Union members currently vote for Democrats by a 32-point margin (58%-26%), and 31% of all current Democratic votes are union members.  However, there is a 13 point gap between opposition to the Republican agenda and support for Democrats:  71% of union members likely to vote in 2011 say they oppose the Christie agenda, but just 58% say they will vote for a Democrat.  This suggests that there is still room to grow among union members.  They are particularly opposed to cuts in pensions (81%-16%) and attacks on bargaining for health care and pension benefits (79%-15%), so it is hard to see how Democratic legislators who back these proposals will be able to increase their vote among them.

A large portion of likely 2011 voters are still not sold on the agenda of Gov. Christie and Republicans in the legislature agenda.  In fact, when you look at the three tasks Democrats must accomplish to be successful in an off-year election – hold voters who are already voting Democrat, consolidate and turn out their traditional base, and win over undecided voters – none of them will be made easier by latching on to Republican proposals.  Each of these groups tend to side strongly and be motivated by traditional Democratic values and arguments rather than Christie’s agenda.

METHODOLOGY
This report covers the results of our research: 600 total interviews with likely 2011 general election voters in New Jersey.  The interviews were conducted March 8-10, 2011. The margin of error for overall results is ±4.00% and higher among subgroups.

The regions for the purposes of this report are partitioned as:

·     NW – which represents 16% of the electorate and is defined as anyone living in Sussex, Morris, Warren, Hunterdon, and Somerset counties.

·     NE – which represents 15% of the electorate and is defined as anyone living in Passaic and Bergen counties.

·     NC – which represents 16% of the electorate and is defined as anyone living in Essex, Union, and Hudson counties.

·     C – which represents 21% of the electorate and is defined as anyone living in Mercier, Middlesex, and Monmouth counties.

·     S – which represents 32% of the electorate and is defined as anyone living in Ocean, Burlington, Camden, Gloucester, Atlantic, Salem, Cumberland, and Cape May counties. 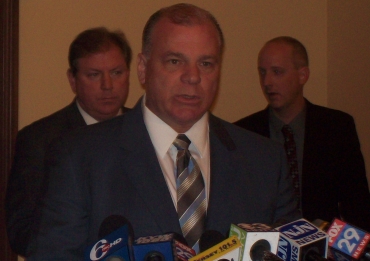