BLACKWOOD – Camden County mayors came away with strong support Wednesday from the highest levels of state government in their quest to regionalize police services.

Though no specific measures have been implemented, bipartisan encouragement from Republican Gov. Chris Christie and Democratic Senate President Steve Sweeney certainly gave their plans a boost.

“We need to be thinking differently. This is a quantum leap for us to have these discussions.”

He, and the officials of the neighboring towns Magnolia, Stratford, Laurel Springs and Hi-Nella, have been  studying for the past two years the idea of combining their respective police forces as one regional police department. That department would serve all four towns.

Passanante admits that while the county plan has slowed down their own regional police force study, a draft of the report is still being worked on. He believes the report could be made public in as soon as a month.

He said some of the details in the soon-to-be-released study could provide some information to the county as it pursues a more expansive plan.

Another mayor, Jim Malay of Collingswood, which has 15,000 residents, called the meeting with Christie and Sweeney “remarkable,” adding that it is worth being posted on YouTube.

He said it was important to have a commitment from state government on its pursuit of regionalizing services. The status quo simply can’t remain, he said, especially in terms of how public safety services are distributed.

“From a municipal budget standpoint, in five to 10 years, we will die,” he said in describing the fiscal crisis his town is in.

One of the ways towns could start saving money, he said, would be to start sharing the detective bureaus of the various municipal police departments.

In the past two years, Malay had to lay off three firefighters and eight police officers. 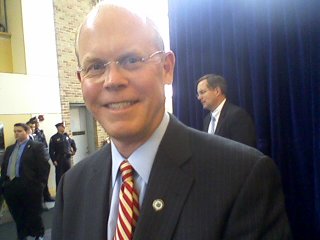