Assemblyman Ralph Caputo, (D-28), of Belleville told supporters at a fundraiser Monday night that he won’t pursue another term as a freeholder and intends to focus on a run for another term in the Assembly this year.

What if the district’s drawn in a disagreeable way?

“What’s fair in politics?” the assemblyman asked. “The only thing I can say is Belleville will be somewhere. It’s not going to evaporate.”

Caputo said he informed Essex County Democratic Committee Chairman Phil Thigpen of his decision not to hold two offices and to pursue his legislative seat again.

“We’ll see what the map looks like,” he said, saying he’s heard buzz about a reconfigured map containing Nutley, Belleville, Bloomfield and the East and North wards.

“Belleville can go into Kearny or Lyndhurst and Secaucus, which would be a competitive district,” he said.

The assemblyman acknowledged he would likely not be in a district with state Sen. Ronald L. Rice, (D-28), of Newark, whose new district may swap out Belleville and Bloomfield for bigger chunks of Newark’s south and central wards.

Caputo’s fundraiser was at Nanina’s in the Park.

A Democratic source also told PolitickerNJ.com that Juan Rivera, a North Ward Democratic Party operative, is the favorite to replace former Freeholder Sammy Gonzalez, slapped out of office by a judge as part of a pretrial agreement last month over Gonzalez’s ballot tampering charge. 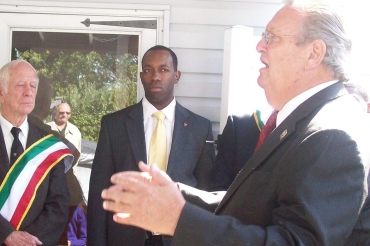