This morning, the attorney for the Citizens for Change team that is opposing North Bergen Mayor Nick Sacco’s slate in the May 10th commission election filed a lawsuit demanding that the leading member of the Citizens’ ticket be placed back on the ballot.

Citizens for Change attorney Mario Blanch described Town Hall’s attempt to toss Michael Kreutzer  as an orchestrated Sacco strategy to eliminate competition in the May election and to deny the people of North Bergen a choice about who should run their town.

“The Sacco Team is trying to short circuit democracy and eliminate legitimate political competition and voter choice,” said Blanch. “These are the actions of a Third World dictatorship, not an American democracy.”

In his complaint, Blanch said the North Bergen clerk erroneously ruled Michael Kreutzer ineligible to run for office. PolitickerNJ.com observed Kreutzer and his Citizens for Change Team file their nominating petitions at town hall on March 14 before the 4 p.m. deadline.

According to the Citizens for Change Team, the town attorney, Herbert Klitzner, subsequently ruled that Kreutzer was ineligible to run for office because he was not a registered voter when his candidate petitions were filed in town hall.

Blanch said Kreutzer was properly registered. He said the candidate’s voter registration form was delivered to the Hudson County Clerk’s office before the filing deadline and he was a registered voter when the nominating petitions were filed in North Bergen.

“We certainly expected him to go to court,” he said. “This was no action taken by North Bergen government to impede him from registering. Ultimately a judge will decide whether he will be a candidate or not. Based on routine data base searches we have not found any votes cast by Mr. Kreutzer – that’s not an allegation. It’s possible we missed it. If the man has been participating in elections there could be legitimate reasons he’s not turning up. But our exhaustive computer data base search indicates that he never voted in an election, and so his candidacy is like the guy washing dishes trying to tell the head chef to hit the road.”

Kreutzer said his nominating petitions were time stamped at 3:56 p.m.

His attorney said that on the day the nominating petitions were being presented to the town clerk, “a courier submitted Kreutzer’s voter registration form, along with a batch of others at the Hudson County Clerk’s office between 3:30 and 3:40 p.m. The courier was unable to get the registration form time stamped until a full voter registration count was completed, says Blanch. That count lasted approximately 10 minutes.”

“Had the Hudson County Clerk carried out his or her functions immediately, Michael Kreutzer would have been registered to vote between 3:30 and 3:40 p.m., which is prior to his submission of the Nominating Petitions,” Blanch said. 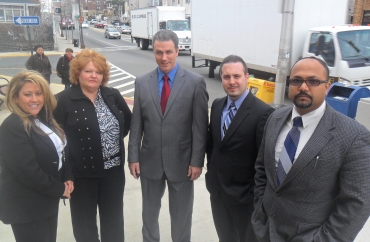