Over the course of the past decade, West Ward Councilman Ronald C. Rice has frequently parted company with his father, state Sen. Ronald L. Rice, (D-28), Newark) on the subject of municipal politics.

The younger Rice ran three times as a member of the Booker Team, and was twice successful.

But Councilman Rice today joined Essex County Freeholder Rufus I. Johnson, his father’s chief of staff, to back “The Children First Team” of Antoinette Baskerville-Richardson, Alturrick Kenney and Deniqua Matias, for Newark School Advisory Board – and present a united West Ward front for the team backed by South Ward Councilman Ras Baraka.

“During this moment in Newark where transformative educational reform is possible for our school district, we need the decision-making abilities, commitment, expertise and experience in education of the Children First Team,” said Rice. “This is not a time for just best intentions or on-the-job training.  We need people serving on the board that have the trust of our community, know our community and will put our children first above all other interests.”

“Most political experts have predicted that the two top tickets in this election will probably divide up the votes in the rest of the city with two wards going to each ticket,” Rice added. “The freeholder and I are here to say that a united West Ward will decide this race for the Children First Team. You can count on that.”

“We will win the West Ward with the Children First Team by old-fashioned, door-to-door campaigning and engaging residents on the vital educational issues that affect all of the ward’s students,” added Johnson. 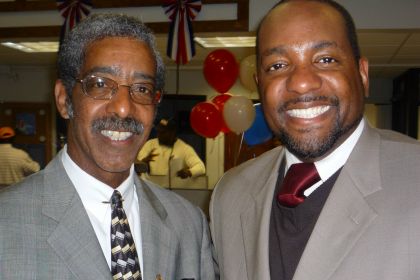