Perth Amboy Mayor Wilda Diaz favors a map that would join the cities of Perth Amboy and New Brunswick, which is on the table in the Heldrich, or it was, at least as of last night when the sedans with government plates on them pulled out of New Brunswick a day closer to the April 3rd deadline.

“My take is something has to happen within Middlesex,” Diaz told PolitickerNJ.com. “You can’t ignore that there is such a lack of diversity here. We are the face of America, and that includes all of the communities.”

After the 2009 corruption meltdown of Assemblyman Joe Vas (D-19), the Middlesex County Democratic Organization (MCDO) held a special convention to find his replacement, with Woodbridge Mayor John McCormac lining up on one side in support of Craig Coughlin of Woodbridge and Diaz backing retired Superior Court Judge Eddie Rodriguez on the other.

Coughlin won handily and Diaz has since gone on offense to increase the number of Latinos at all levels of government, testifying at redistricting commission hearings in support of a map distributed by the Latino Leadership Alliance of New Jersey (LLANJ), an organization that backed Diaz’s 2008 mayoral victory over Vas.

“You can’t have larger communities justifying their control of a senator, assemblyman and freeholder,” said Diaz, whose wharf front town is dwarfed by neighboring Woodbridge. “What about the rest of us? I have been in favor of having greater Latino representation and if that means teaming up with New Brunswick, that’s fine. We’re facing the same issues right now. We’re both urban.”

Diaz said she had not spoken to Assemblyman John Wisniewski (D-19) of Sayreville over the last several days. She said she notified the co-chair of the redistricting commission publicly about her concerns.

“I testified not once but twice,” she said. “I want to be very clear. This is not personal. I am fighting for the community.”

If New Brunswick were to join in a district with Perth Amboy and Sayreville, Wisniewski could be poised for a move up to the state Senate. Diaz denied that she struck a deal with Wisniewski: backing for a PA/NB map now in return for Wisniewski enabling one or two Latinos to take Assembly seats.

Middlesex sources still fume over Diaz’s initial endorsement of former South Amboy Mayor Jack O’Leary as a replacement for Vas and chafed as she later pushed hard for Rodriguez when O’Leary’s candidacy went belly up amid ethical allegations. Allies of Vitale’s point out that a New Brunswick/Perth Amboy pairing turns a district from 30% minority to 36%, hardly a major leap. 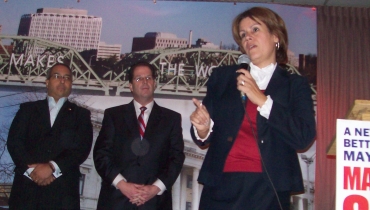