On Thursday, the Senate Government, Wagering, Tourism & Historic Preservation Committee will handle S2455, which allows for county governments to abolish of offices of superintendent of elections, deputy superintendent, or both. It transfers the powers and duties of the positions to the commissioner of registration or county board of elections.

Although the law is permissible – that is, it allows, but does not require, the abolishment of the positions – many election officials are of the opinion that the bill would diminish election oversight.

UPDATE: State Sen. Jim Whelan (D-2), committee chairman, said the bill will be amended to limit the proposed change to a pilot program. Two counties will have the option of actively opting-in to the position elimination proposal.

The bill has no Assembly equivalent and only one sponsor, state Sen. Donald Norcross (D-5), of Camden, although Norcross worked with state Sen. Anthony Bucco (R-25), of Boonton, to craft the amended version.

Norcross sees the bill as an opportunity to reduce county costs and streamline election procedures.

As one county election official put it, “It would basically half their salary. I don’t see it having much savings.”

The county could eliminate a deputy to find savings, but removing both would require the hiring of a commissioner of registration and/or expanding duties of the board of elections and their clerk, who may ask for an increased salary for their trouble.

All of this may also have a cost to voters who depend upon fair elections.

As Monmouth County Superintendent of Elections Hedra Siskel told PolitickerNJ in January, “It’s a check and balance situation…You may gain some dollars, but I don’t think that the savings are worth it.”

The bill was held from a vote in the committee at the end of January. Norcross was not present to answer questions, which several elected and non-elected officials voiced.

Representing the N.J. Association of Election Officials, lobbyist Dale Florio told the committee, “The debate comes down to what you think you might save vs. can you run a better election process. The only system guaranteed nonpartisan is where you have a superintendent of elections.’’

At the meeting, Bucco said he had a similar bill that he was hoping to speak to Norcross about, which resulted in this bill’s amendment.

Bucco was unavailable this morning to speak the topic, as were two other committee members.

State Sen. Bob Gordon (D-38), of Fair Lawn, said he wants to hear the answers to the questions posed before committing any support.

The Department of State, which oversees elections, isn’t taking a stance beforehand.

“We’re looking at (the bill), but officially we don’t comment on legislation,” said spokesman Shawn Crisfulli.

Bill to allow elimination of election superintendents on hold 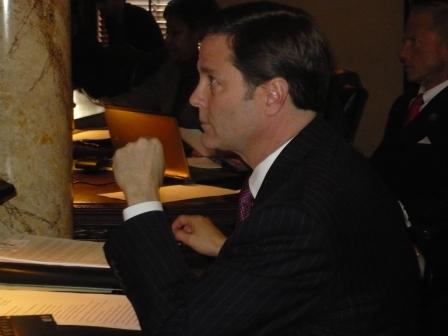