According to a relase from the embattled organization, the vice-chair is vested by virture of the committee’s bylaws with the authority of the county chair “until the following June, when a County Reorganization Meeting shall be held and an election conducted for the offices of Chair and vice-chair.”

“I am assuming the role of chairperson under the most unfortunate circumstances,” said Gottlieb. “I will be working closely with party leaders and the Middlesex County Democratic Organization’s staff to ensure a smooth transition through the Democratic conventions and the June primary.”

Sources say Kevin McCabe of Woodbridge, an executive with the New Jersey Carpenters Union, stands poised to run for the vacated seat in June.

A near winner in his joust with Scott and the embodiment of the anti-Spicuzzo wing of the sprawling party organization, Polos today didn’t rule out running for the chairmanship, but didn’t sound as though he was rubbing his hands together and plotting for it, either; all but dismissing the likelihood he would take a shot.

“First of all, I would hope that Joe would step down as chairman,” said Polos of Highland Park, about an hour before the party organization announced the chairman’s departure. “I would embrace an open process, but I am not sure I am interested in pursuing that. I am interested that now whoever that person is, he or she embraces the entire party. This can’t be a party run by a few select individuals. The next chair needs to recognize that.”

He considered McCabe as a successor to Spicuzzo.

“I think Kevin would be a quaility, viable candidate,” Polos said. 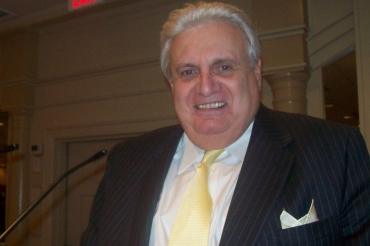