NEW BRUNSWICK – There was a scene in Joseph Conrad’s “Heart of Darkness” when the character Kurtz says, “The horror… the horror,” and by the reckoning of a lot of political insiders observing this redistricting process now in the 11th hour, that gut-wrenching scene just about captures the mood of many of the state’s legislators.

“This is the long dark night for politicians,” said veteran Democratic Party strategist Paul Swibinski. “You never know who’s going to be coming up behind with a long dagger. Some people accept their fate. Others become part of the decision-making process. And others make contingency plans.”

In one Republican scenario, Assemblyman Pete Biondi (R-Hillsborough) would get chopped up. He said he’s not panic-stricken, and didn’t sound at all ruffled when PolitickerNJ.com called him.

“I hear nine different things,” Biondi groaned. “I told Al (SOmerset GOp Chairman Al Gaburo) that it’s either going to be the three of us running together or we’ll be split up. Whatever will be, will be.”

The deadline is Sunday and the redistricting commission vote is set for noon of the same day. Today, Thursday, the party’s lieutenants roamed the hallways at the Heldrich Hotel with cellphones pressed to their ears and eyeballs reddening by the hour as everyone on the inside continued to work with 11th member Prof. Alan Rosenthal and a lot of people on the outside sweated the final outcome.

“I’ve never seen politicians so afraid – more frightened – than they are right now,” said one party insider.  “Consider this: Republicans are more worried about Republicans, and Democrats are worried about Democrats. Nobody trusts anybody. It’s horrible. This is the scariest time in a politician’s life. Some careers will end.”

Republicans thumped their chests about control and command, a disciplinary directive from Gov. Chris Christie for lockdown.

“I went up to (one of the five Republican commissioners) at a recent… event,” said a veteran GOP insider. “I tried to pry some intel out of him, and man, he didn’t say boo. They’re playing it close to the vest, all right. Meanwhile…” and this spoken with a cackle of amusement… “it looks like the Democrats are killing one another.”

Behind the scenes, Democrats continued to grind their teeth about Christie’s Sunday paratrooper drop into the hotel for face time with Rosenthal.

“The reality is the Republicans are going no place so all they can do is make a lot of noise,” said a Democratic insider. “Look, you pull one gumball out of the machine and all of the other gumballs fall, ok? At this point, the Republicans – this is their only shot, ok? – are probably going to just throw their dream map up there to give Christie the satisfaction of soundbites. That’s the victory at this point for them. Did you think of that? How much is going to be soundbites for this very vitriolic governor? He wants to be the victim. He’s smart. He wants another bully pulpit. He is an interesting and cunning man and he’d rather rule by soundbites than performance. That’s the play here.”

Another operative familiar with the process did not put any stock in the Julius Caesar dramatics playing out Wednesday afternoon, as state Senate Majority Leader Barbara Buono (D-Metuchen) and state Sen. Joe Vitale (D-Woodbridge) felt suddenly like they were surrounded by men in togas wielding daggers.

“You will hear every silly scenario from both sides,” the veteran said.

“It’s horse-trading,” agreed a veteran North Jersey operative, a Democrat. “I’ve been through this before where the district is changed one minute and then changed back in the next and everyone gets all agitated.”

“I had always seen Bartels as a laid back sort of guy,” said another insider, someone who sat on the commission in the past. “Rosenthal is too but at end of day, what I’m seeing here is that Rosenthal is actually shaping the map. Bartels was reacting to what they were saying. Rosenthal is really helping to shape the outcome.”

Another insider, and as the time ticked by on Thursday they kept coming, adding insight to the molten mix.

“My observation is Rosenthal is acting as a real mediator, trying to mold and shape a map,” said the source, speaking on condition of anonymity. “I think ultimately he will have to choose one of the maps. He will have to pick one, but he has done his best to get both maps to be not so far apart.”

The same source, a Democrat, said he/she believes yesterday’s map that in part would pit Buono against Vitale and create other intra-party gladiatorial contests, is legit.

“I think it was their last best offer – an anxiety-causing map that would cause the least amount of anxiety given the short time frame here before the deadline,” said the source. “Truncate the process to a week of craziness as opposed to a month. They couldn’t take it if it was a month. Think of the abuse. The phone calls. This way here they take a week of grief and they’re done.”

As the day came to a close, Republican Redistricting Chairman Jay Webber walked across the hall in the company of fellow GOP Commissioner Bill Palatucci toward the Democratic side of operations here at the Heldrich.

A Democratic Party source in Passaic said there was angst in the Girgenti camp about the senator’s future.

That was a common refrain elsewhere, too. 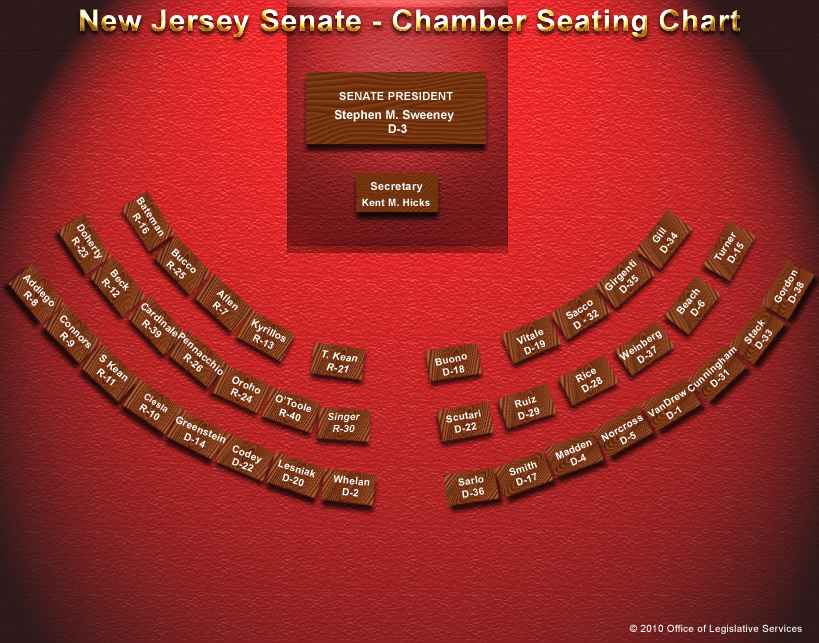