NEWARK – For 37 years, the most powerful people in New Jersey have been standing around the banister of a sweeping staircase in Newark doing their best to further impress arguably the most powerful of all, Steve Adubato Sr., their host at the North Ward Center.

“We’re all Americans,” the aging but tireless man reminded them from the second step of the staircase tonight, recalling the party-less days of America when he was growing up in the throes of World War II. Party-less, they all gathered tonight. Gov. Chris Christie, Lt. Kim Guadagno, state Senate Pres. Steve Sweeney (D-3), a few congressman, a handful of state Senators, a gaggle of Assembly persons, a pack of mayors, a former governor, heads of industry, masters of law, leaders in education, and at least a smattering of average Newarkers stood to hear what the gritty godfather had to say. “In this room, people make destiny,” Adubato told them.

They are celebrating the Annual St. Patrick and St. Joseph Celebration, where one Irish and one Italian person are given praise for their service by Adubato’s urban army of education and political enthusiasts at the North Ward Center, but all of the love is delivered in roast master-approved comedic carnage.

Christie recalled his re-appearance two years ago, after refraining during his stint as U.S. Attorney, phone-tapper in chief: “It was great to once again put the faces with the voices.”

For those worried: “Joe Hayden is here with business cards,” he said of the top-notch defense counsel. Also in the crowd, Michael Critchley, the lone lawyer to spring his client from Christie’s law enforcing paws. “Critchley doesn’t need to have business cards.”

Assembly Speaker Sheila Oliver (D-34) was absent, noted by Christie when he looked around to address her: “She’s not here? Steve (Sweeney) and I are shocked.”

Emceeing was local media icon and son of the host, Steve Adubato Jr., “the Charlie Sheen of New Jersey,” as Newark Mayor Cory Booker put it.

“The man has tiger blood,” Booker said, after Adubato asked for clarification on whether Brick City was named after the documentary crew saw Booker playing basketball.

Not of the Irish or Italian persuasion, Booker said before running off to the NCAA tourney that his roots are in a “small island south of those nations…called Africa.”

Essex County Clerk Chris Durkin was surprised to see Christie in the state after two days of snow, but turned his wrath elsewhere.

“I see big things for (state Sen.) Kevin O’Toole,” Durkin said. “If Kevin stays on this path, I think Kevin O’Toole can be the next Jim Treffinger.”

He jabbed, asking DiVincenzo if he was going to get behind Christie in the next election. “We got (state Sen. Brian) Stack and we got Sweeney. Are you with me?”

Wisniewski said he didn’t know Gilmore very well before the redistricting process, but after spending several months and countless meetings with the man, “now I can honestly say I really don’t know George Gilmore.”

The best way Wisniewski could describe the organizational mastermind of the shore towns was to recall the feedback generated from double-counted votes in GOP bastion Barnegat Bay, 2006.

Republicans called it a computer glitch, Wisniewski said, and Democrats called it an outrage; “George called it a pilot program.” (Which he full-throttled to get Christie elected, zing.)

They picked Wisniewski to introduce him, Gilmore said as he took the podium, to keep a thumb on Gilmore as redistricting winds down; but the Ocean County chief laughed off the thought of Wisniewski controlling him, “as much as he can control (Woodbridge Mayor) John McCormac.”

O’Toole said Gilmore remarked as he arrived for his first North Ward Center event, “This place is different.” 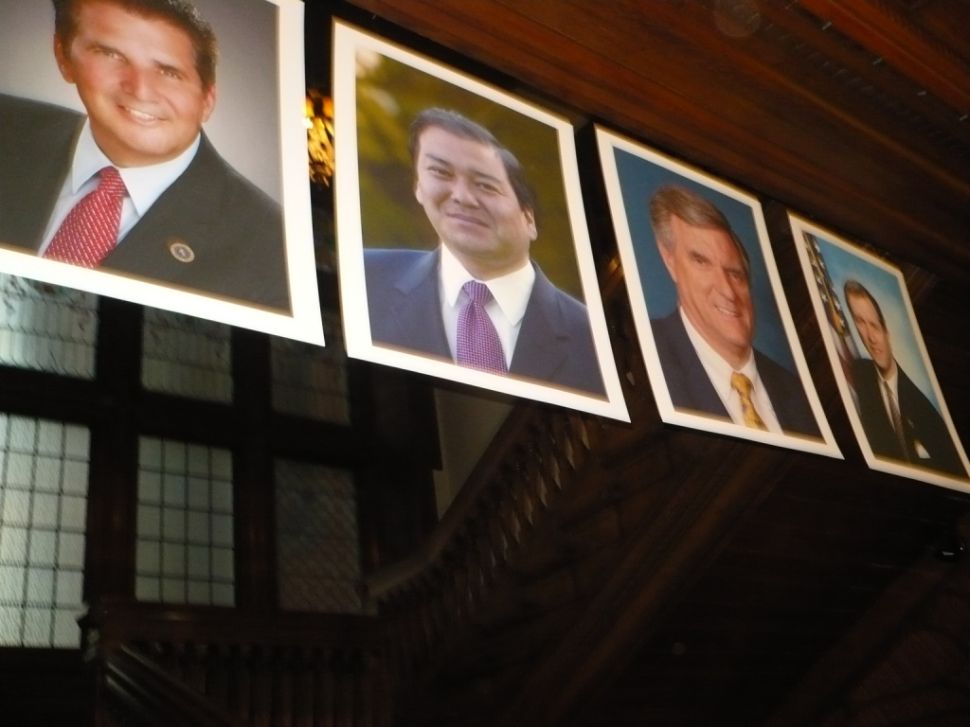