NEW BRUNSWICK – This morning’s Democratic map, according to sources on both sides of the aisle, looked like a play by Sen. President Steve Sweeney (D-3), of West Deptford, to exact pain on past and future opponents.

Between potential Democratic gubernatorial contenders and those who sided against Sweeney for the Senate presidency, the map – still in a state of flux – at least as of this morning found a way to make many of their lives very difficult.

Vitale backed state Sen. Dick Codey (D-27), of Roseland, against Sweeney in 2009 for the presidency.

Two other Codey-backers are also finding themselves being pitted against each other by their own party, too.

State Sens. Robert Gordon (D-38), of Fair Lawn, and John Girgenti (D-35), of Hawthorne, would face off in a reconfigured 38th that takes Hawthorne right out of the Democratic-favored, Paterson-based 35th.

“I really don’t want to speculate until I see a map,” Gordon said today. “I have very little control over the process.”

Gordon has some footing in Passaic County, where part of his family lives and where he formerly owned a business, but Girgenti’s stronghold is Paterson.

He declined comment, but Girgenti seems to be greatly at risk – not only because he would lose Paterson – but because he would still be facing another primary challenger aside from Gordon in Jeff Gardner, the new Democratic chair in Hawthorne who’s gunning for Girgenti mainly because of the senator’s gay marriage ‘no’ vote.

Then there’s Codey himself, who is reportedly being pushed into the Republican lands of Morris County, as of today.

Codey also declined comment, but has a considerable warchest and has previously denied being worried about his chances after redistricting.

Like a tennis volley, the five Rs and the five Ds on the commission are sending maps across the court. But without a view of the court, no one can follow the score. It’s up to tiebreaking Prof. Alan Rosenthal to signal game-set-match when the time is right. 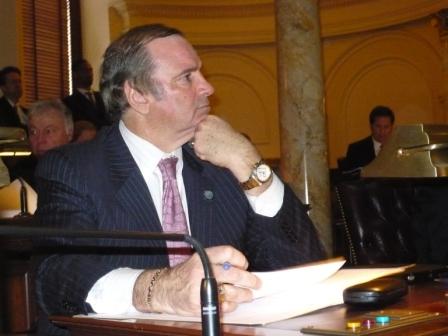