NEWARK – Standing in an Ironbound classroom where his own father went to school, Gov. Chris Christie said, “I have extraordinary confidence in Chris,” and he wasn’t speaking in the third person.

The governor referred to Acting Education Commissioner Christopher “Chris” Cerf, who over the next few days will be refining a search for the new superintendent of the Newark Public Schools.

“That process will start this weekened,” said Christie of the final stage of interviews.

“I will meet the final candidates and provide my advice and counsel and then he will make a judgment,” said the governor, again indicating Cerf, who stood with him at a press conference in Ann Street School following a governor’s talk with students.

Cerf will render a final decision in May, Christie said.

The governor said Cerf has solicited names from national and local leaders, inlcuding Newark community leaders, the charter schools community and the Schools Advisory Board. He singled out Mayor Cory Booker for playing an integral advisory role in the process, and Advisory Board Chair Shavar Jeffries.

“Considering that we spend $800 million in Newark schools each year, everybody has a stake in the Newark School system,” said the governor, who within the broader scope of his schools reform agenda wants to eliminate teacher tenure and implement merit pay.

Christie’s father went to this school, one of six total Ironbound neighborhood schools, all of which are overcrowded by 40% and over 100 years old.

“You wouldn’t see something like that in other schools – unless you were in Camden,” said East Ward Councilman Augusto Amador, who indicated the classroom ceiling, which bore signs of disrepair.

The governor’s appearance here today comes in the middle of a citywide contest for three seats on the Newark Schools Advisory Board. Distressed over Cerf’s founding of Global Education Advisors, an outfit that after Cerf left the company landed a $500,000 foundation contract to undertake a study of the Newark schools, state Sen. Ronald L. Rice (D-28) of Newark continues to block the acting commish’s path to becoming a full commissioner.

One of the two main slates in contention is backed by Central High School Principal/South Ward Councilman Ras Baraka, who wants Cerf to resign.

It is to Rice, who today announced plans to propose legislation that would require private donations to state-controlled schools to be funneled through the Department of Education.

“If private philanthropists want to invest in the future and make substantial donations to public education in New Jersey, I’m fine with that,” said the Essex senator.  “However, we have to be aware that sometimes, these donations come with strings attached, or come from sources with less-than-stellar reputations.  New Jersey residents need to know where the money’s coming from, and what it’s intended for, before their school districts agree to the terms of the donation.”

The bill would create a fund within the DOE – dubbed the “Private Investment in Public Education Fund” – that would serve as a depository for all funds donated to school districts under partial or full state control.

Any donations made to the district would be forwarded to the Commissioner of Education for deposit into the fund.  The school district would be required to post information about the donation on its website, including the name of the donor and the intended purpose of the donation.  In order to withdraw the funds from the account, the superintendent, with the approval of the district school board, would have to apply to the Commissioner of Education for withdrawal.

According to a release from Rice, the “recent donations to Newark public schools – including a much-publicized $100 million donation from Facebook creator Mark Zuckerberg, a $3 million donation from the Bill & Melinda Gates Foundation to develop a teacher evaluation system, and funds intended for charter schools development that were channeled through a private consulting firm, Global Education Advisors, which was founded by Acting Education Commissioner Christopher Cerf before he was appointed to lead the State Department of Education – leave the public with more questions than answers.”

Is Christie bothered that he and Cerf are at the center of the local race?

“We’re not at the center of it,” the governor said. “The state’s in the center of the Newark Schools system. I couldn’t care less who they try to elect. They (the advisory board members) have a key role to play and we will work with them.”

But ultimately, the state runs the schools, he said.

“And a lot of fathers and mothers are sick and tired of being treated like second class citizens,” the governor added.

Advisory Board Member Eliana Pintor Marin – who’s running against the Baraka-backed slate – disagrees with Christie (and Amador, for that matter) on the issue of merit pay. She doesn’t support it. But the Christie as boogie man issue doesn’t have any merit, she said.

Darryl Isherwood contributed to this report 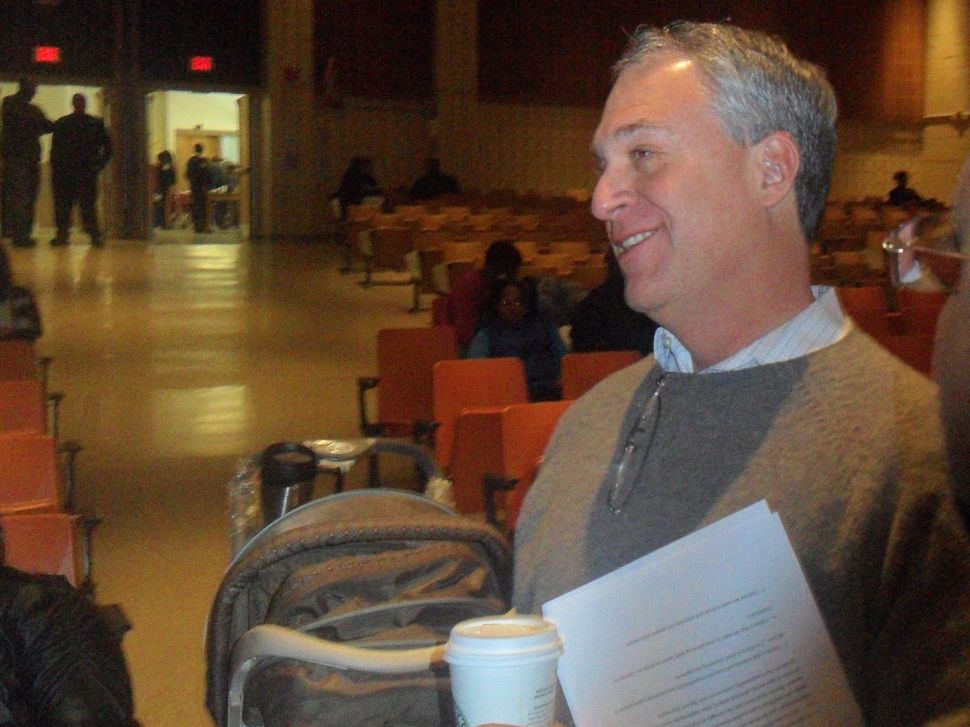