GARFIELD – The star of this big, gaudy, double chandelier send-up in the Venetian was U.S. Sen. Bob Menendez (D-N.J.), who heralded West New York Mayor Silverio “Sal” Vega as a towering local figure whom the people better see fit to re-elect in what many insiders figure will be the most interesting local May race of the cycle.

“I came back from Washington directly here because I know the future of West New York depends on Sal Vega,” Menendez shouted into the pink-purple abyss where the crowd of 1,200 resembled Roman royalty awaiting the start of the gladiatorial games. One misstep on the immaculate polished marble and you could easily eat the floor.

“I know the educator, the mayor, the person who carries West New York in his heart each and every day,” added the senator, impassioned enough to lift people out of their seats.

All the while, a shadowy figure stood in the corner, out of range of the nimbus at the head of the room, at the darkened edges of the packed-together plunging necklines and uptilted chins and repeated applause. The stranger looked like someone familiar with the fitful mechanical underpinnings of Hudson County.

Moreover, it was a warning to volatile Union City Mayor Brian P. Stack not to push too hard into the framework of West New York’s so-called nonpartisan political drama. Vega’s running against the combat boot stomping Dr. Felix Roque, whom Stack loyalists for two years now have dissected from across town as an earnest if relatively disorganized alternative to a once vaunted and now bloated and nearly toothless party organization.

But when Stack ally Assemblywoman Caridad Rodriguez formally surfaced Monday as a candidate for municipal office on a slate with Roque, DeGise and Vega and even affable HCDO Chairman Mark Smith could hear a fuse being lit in West New York with the potential for a civil war eruption and a countywide conflagration if Stack backs Roque/Rodriguez with more than playful retaliatory symbolism as he broods on Democratic redistricting maps that remove West New York from his district and lump him with a bigger section of Jersey City.

“If I lived in West New York, I’d be working day and night to get him elected,” Menendez said fervently of Vega, again triggering a sustained roar from this South Bergen encamped crowd, wriggling in a room just a street removed from the Passaic River after many of them drove down out of the Palisades and across the swamps to get here.

“Brian has not done anything to hurt Sal,” Vega Spokesman (and veteran HCDO gunslinger) Paul Swibinski was saying, olive branching overtime. “We would welcome his support.”

But Bertoli’s presence here fascinated. For his closeness to the renegade Fulop – a calculatedly arch enemy of the HCDO – and longtime opposition to the likes of Sacco, clashed with this HCDO food fest until one considered the possibility of a strengthened bridge being built here between Fulop and establishment Dems.

Was Bertoli working for Vega as part of a deal to get HCDO support lined up behind Fulop for Mayor in 2013?

“It’s a good team we’ve got here,” said Swibinski, in a small circle of Vision Media operatives and the iconic Bertoli.

“He’ll be in the field,” Swibinski said, when asked about Bertoli’s role. That would stand to reason. Bertoli has the house-to-house maps in West New York going back to Sires v. Vas.

“That’s what my wife calls me,” the operative cracked.

No. Field director seemed to fit. There was general acknowledgement that would be his title.

PolitickerNJ.com went to a lifeline on the Bertoli angle after one source said this was nothing more complex than a guy drumming up business in a downbeat cycle. This other source, out of Hudson, said no. “Tommy’s good. They’re bringing him in because they want his expertise. Simple as that. This is no favor for Tommy. This is Tommy doing them a favor.”

Knowing that Vega leans on Demellier, Vega’s opponent in the mayor’s race immediately pounced all over the headlines.

“Time and Time again Vega has done what is best for him and his friends as opposed to what is best for the residents of West New York,” Roque said. “Dr. Roque believes that you can judge a person by the company he keeps. Dr. Roque notes in the case of Vega, his associates now contain a man seen comfortable making deals with an FBI undercover agent, a spokesman who was an unindicted co-conspirator in a corruption trial and a commissioner candidate previously charged with assault.

A day after Roque’s press release slam, sources said Bertoli joined the Vega campaign to take the reins from a fast vaporizing Demellier.

When the Hawaii Five-O soundtrack kicked in, Vega grabbed the microphone from Menendez. If one were looking for a wave, it came in the form of 1,200 people rising out of their chairs and engulfing the room in applause.

“We are the team to take West New York forward,” cried Vega, projecting a Joe Pesci voice into the crowd and penetrating with a short speech that seemed to satisfy just before segueing into the Tom Jones classic, “It’s not Unusual.”

This Saturday, Roque plans his own fundraiser, with his own heavyweight.

According to the invites, the challenger has enlisted the aid of Hall of fame boxer Larry Holmes as the honorary guest at his mayoral bash.

There were glances of vague interest among the Vega operatives.

“So they paid him,” he said, already on the clock. 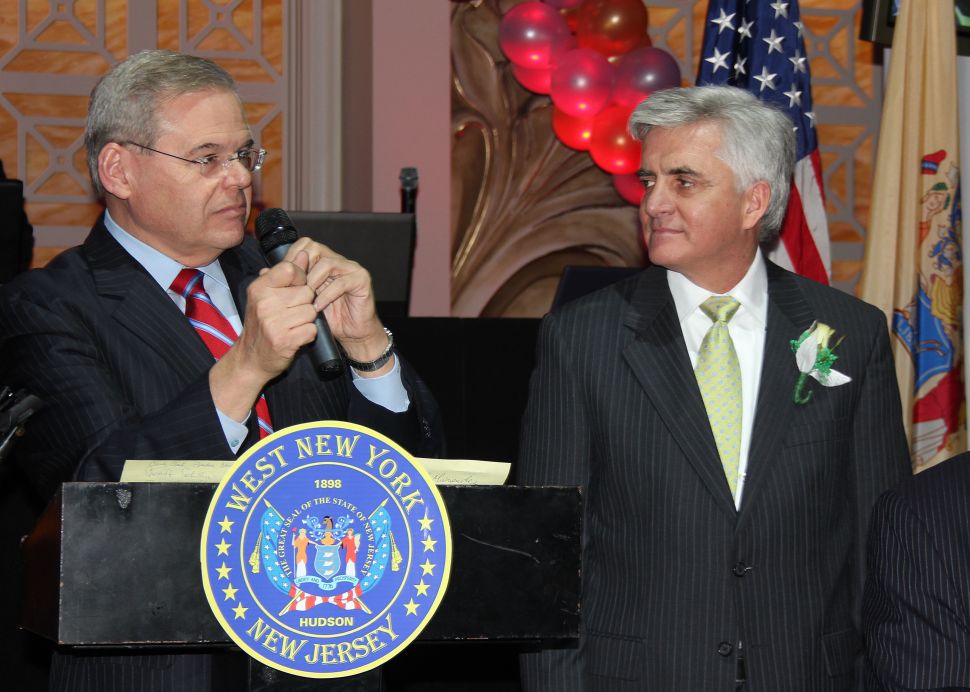