Living with the chasm that opened up yesterday and suctioned Middlesex County Chairman Joe Spicuzzo out of power, Middlesex Democrats worry about a party organization at odds with itself, feeding itself into submission by slow degrees.

In the turmoil, Woodbridge Mayor John McCormac is making his move and state Sen. Bob Smith (D-Piscataway) is on defense.

Charged by the state Attorney General’s Office yesterday with pocketing $50,000 in exchange for landing public payroll sheriff’s office jobs for young recruits, Spicuzzo promptly resigned, leaving party members to uneasily look at one another – upset by the thought of a 65-year-old man, 16 years their titular leader, in a state lockup, as they wait for a showdown between Smith and McCormac for ostensible control.

Despite the raw numbers overwhelmingly in their favor – 155,090 D’s to 53,048 registered R’s and 184,724 unaffiliateds who lean D – few are optimistic about resolving ongoing structural problems.

Although several key sources knew Spicuzzo was a walking time bomb ready to go off in a courtroom setting somewhere, others registered surprise at the thought of their kindly party chairman wheeling and dealing. The chairman had a reputation not as a guy who wielded a hammer, like former state Senate President John Lynch, for years the power boss who united the county under his rule until derailed to jail on federal corruption charges. On the contrary, Spicuzzo was the county’s avuncular teddy bear, who could more easily play Santa Claus at Christmas time than move people like pawns on a chessboard.

“He sure is cuddly, isn’t he?” Gov. Jon Corzine roared to a crowd in Edison on the campaign trail, moments before embracing Spicuzzo, who had supported U.S. Sen. Frank Lautenberg over South Jersey challenger U.S. Rep. Rob Andrews and in the process built upper echelon cred with Corzine, who rewarded him with a seat on the New Jersey Sports and Exposition Authority heading toward election season.

The party’s essential fractures again now underlie an autopsy of the Spicuzzo era’s last stages, as the powerful McCormac, up for re-election this year – stands poised to make the most significant power play.

Sources say the Woodbridge mayor – whose town claims 136 of its total 144 county committee seats, second largest countywide only to Edison’s 154 of its 156 and ten percent of the county’s 26 towns – backs Kevin McCabe, an executive with the New Jersey Carpenters Union, as the next party chairman. McCabe has other supporters, too, and not just in Woodbridge. The thought is his union cred will be exactly what Democrats need in order to try to pull back private sector labor from its ongoing flirtation with Gov. Chris Christie and affix it solidly back in the D column. Democratic Party commitment to building and trades labor is crucial not only in a big, important county like Middlesex, pop. 900,000, but statewide, said sources.

Plus, McCabe is from Woodbridge, “the best organized town in the county,” said McCormac of the county’s biggest town and heftiest political building block.

“He knows the town inside and out – remember he was organizing Woodbridge for McGreevey,” one source told PolitickerNJ.com. Yes, is the devil’s advocate rejoinder, and the first references you get when you google “Kevin McCabe” are to stories about the ex-governor, who infamously crashed and burned.

“Kevin’s going to have to get in front of that right away,” acknowledged the source. “People were pawing around in garbage cans trying to come up with stuff on Kevin, and they never did.”

That said, some rank and filers worry about the negative impact of a McGreevey guy standing at the apex of the party organization now – after the back to back blow-up of Lynch and now Spicuzzo.

“He’s not a McGreevey guy, he’s a Woodbridge guy – and a labor guy,” a source pushed back.

Broken into north county/south county camps that hardly project bulletproof unity on the topic of the next party chair, the terrain in the Spicuzzo aftermath – as usual on all things related to Middlesex politics – roughly splits into Smith on one side and McCormac on the other with a lot of mini fiefdoms and individualized ambitions in between.

More than Middlesex mechanical focus, state Democratic Party Chairman John Wisniewski of Sayreville obviously projects statewide intent as the party’s chief Christie attack dog. State Sen. Barbara Buono (D-Metuchen) also radiates a fledgingly statewide presence as she eyes a run for governor in 2013. Wounded last week by news stories underscoring her war with her own council, Edison Mayor Toni Ricigliano still must contend with the residue of the Choi era. She and Buono both intently watch the movements of former Mayor Jun Choi as rumors continue to circulate that he’s gearing up to challenge Buono in the 18th District from his old power projection platform of Edison.

The state Republican Party already seized on an opportunity Monday to try to soften up Buono with an email flashing back to her proud endorsement of Spicuzzo for his seat on the Sports and Expo Authority.

Then there’s McCormac, arguably the most powerful Democrat in the county, who served on Christie’s gubernatorial transition team, whose critics acknowledge his political prowess even as they prepare to hit the panic button over his tight relations with the Republican governor.

Smith (74 committee seats in Piscataway filled, 78 total), himself a former county party chairman, and Wisniewski (58 filled in Sayreville, of a total 66), whose law firms both handle public sector contracts, continue to fuel resentment from within the organization. They’re not the only public sector workers in high places, but they’re the most visible – and sources say they both oppose McCormac’s increased control.

“It all adds up to a mess,” groaned a committee member, speaking on condition of anonymity.

In the middle of a developing civil war yesterday, 34-year-old Carteret Mayor Dan Reiman declared his commitment to run for the seat just vacated by Spicuzzo, publicly playing havoc with McCormac’s refrain to other party leaders that Democrats can’t afford another elected official in the chairman’s seat whose every move or misstep is going to be blown into a headline that hurts the organization.

Most sources said Reiman’s play will go nowhere. Carteret has 38 committee seats. Woodbridge is too powerful and McCormac’s reach too long, with connective tissue to other towns countywide.

Despite his advantages, McCabe will have to secure victory without Smith, who is expected to put up his own candidate for the chairmanship, according to two sources.

“Bobby was really running the county for Joe, and if McCabe becomes chairman, Bobby will have to relinquish control, which he doesn’t want to do,” said a high-level Democratic Party source. “Bobby won’t go quietly, but he’ll go.”

Barring a Smith-Reiman-Highland Park Freeholder Jim Polos alliance or some cobbled together variation on a triumvirate like that – or a game changer out of Edison – the McCormac-backed McCabe has a significant leg up. It seems unlikely that south Middlesex (ie. Smith and his allies) would invest the north county-based Reiman with their power.

“Ultimately, Danny (Reiman) will have to fold into McCormac,” said one source.

Meanwhile, Smith was in full bore operative mode – on the telephone and in meetings all day Tuesday as he tried to stand up a candidate to succeed Spicuzzo and check McCabe’s advance.

“He’ll have someone in 24 hours,” one source promised.

As appalling as the news was Monday, party members choked it down and appeared ready to move on.

“It’s a shock,” said South Brunswick Mayor Frank Gambatese. “It surprised us all, and it’s disappointing in a lot of ways. But the organization is not comprised of a leader. It’s us. As for the next chairman, we need someone to step forward to be the intermediary here. That said, that’s not going to win or lose elections. Elections are won by the various towns that are doing a good job. There are many mayors working to keep Middlesex County at the top of its game.”

For the record, Gambatese’s ticket last year trounced the GOP.

Asked for his own opinion regarding the next chairman, the South Brunswick mayor suggested Mayor Richard Pucci, the mayor of Monroe.

“Mayor Pucci who has been in Middlesex County for a long time and he keeps getting elected,” Gambatese said of Pucci, who’s up for re-election this year.

“There are others really qualified. Let me tell you, it’s not the most thankful job in the world. It’s work that requires a lot of cooperation. This is a big county.

“I know I’m not interested,” the mayor added with a laugh.

The overriding thought was that if the cuddly Spicuzzo could be nursing a back story like the one revealed yesterday, what else is hiding out there in Middlesex County?

“Those suggestions in the paper yesterday hurt me,” said Gambatese. “Most people are doing a very good job here. I come from Passaic County, and nothing that goes on here compares to that, believe me.” 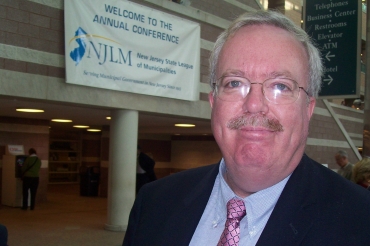