“We have to find a way to come together as a community,” Jeffries told an auditorium packed with Newarkers here Louise Spencer Elementary School to engage Acting Education Commissioner Christopher Cerf, confessing publicly the political division that now exists when it comes to the Newark schools.

“I pray that as a family we can disagree, but then come out of our home to change lives,” added the chairman. “I want us to have a civil conversation.”

One thing he does know is Newark schools must improve.

“We were disappointed to receive plans for (a) specific proposal (to close certain public schools and potentially replace them with charter schools) in the press,” Jeffries said. “We’re working with the state and the district to evaluate the plans.”

But “This is educational genocide. We have many good schools. We have some great schools but then we have others that we really need to look at hard.

“The board will have an independent assessment,” he said.

And he will also have to make his own personal and political assessment when it comes to next year’s election.

The two slates are running straight into each other against the backdrop of news broken by the Star-Ledger that Cerf’s former company – in a deal engineered by Mayor Cory Booker – received a $500,000 paycheck from a California foundation to undertake a study of Newark charter school potential.

Jeffries had Adubato’s support – and $1,000 from Cerf –  when he ran for the school board and won the biggest vote total last year. But he lives in the South Ward, his own political base and potentially his platform for a future mayoral run.

“I haven’t decided yet,” Jeffries told PolitickerNJ.com. “I do plan to endorse, yes, but I haven’t decied yet, I’m examining that right now.”

Both sides were gearing up for April 27th.

Tave Padilla of Adubato’s For Our Kids ticket worked the door of the elementary school prior to the event. He’s running with Eliano Pinto Marin and Dr. Cris Pernell. As people entered they encountered a table stacked with literature distributed by Baraka’s The Children First Team, which consists of Antoinette Baskerville-Richardson, Alturrick Kenney, and Deniqua Matias.

Cerf took a fairly steady beating at the hearing.

“I take my reputation and integrity as seriously as anyone in this room,” he said in answer to someone calling it into question over the fact that Global Education Advisors, a firm he founded prior to becoming acting commissioner, fulfilled a $500,000 contract to study Newark models of education.

“I stand by my passion for children and my track record,” said Cerf, former deputy chancellor of schools in New York City.

A woman railed at the microphone and the backchatter rose to deafening, leaving Cerf stranded onstage with a dangling microphone presiding over a mood headed for confusion.

Jeffries jumped into the breach.

But who will he back in the school board race?

“It is not only possible, it is probable,” he said later, after the meeting, when PolitickerNJ.com asked him if he would back a split ticket. “I’m meeting each candidate and will support the three candidates who I believe are most qualified to achieve great outcomes for kids.

“So far, I’m supporting DeNiqua Matias, who I’ve gotten to know fairly well since we campaigned against each other last year. She’s smart, independently minded, an educator, and supports many of the reforms I believe our kids need. She supports tenure reform, supports high-performing in-district and charter options for kids, and supports redoubling our efforts to ensure we have great teachers and principals who have the support and autonomy they need to be successful. She also has the toughness to independently advocate for kids in the face of the inevitable political pressures that confront elected officials.” 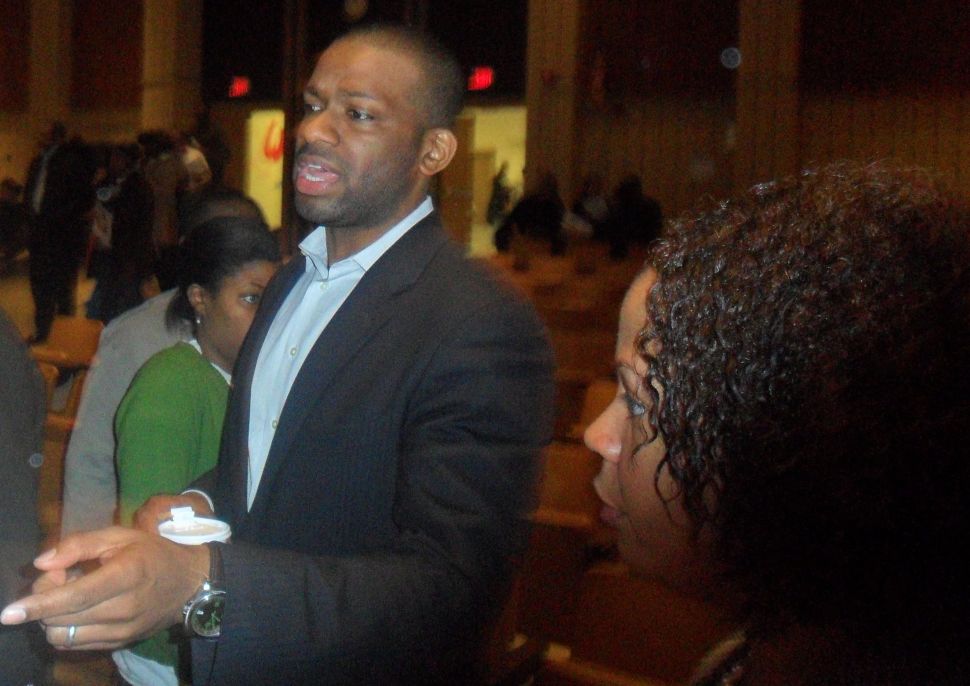