The Senate Judiciary Committee will decide on several gubernatorial board nominees on Thursday. But the list isn’t long enough to satisfy Republican lawmakers who have been incensed over a year’s worth of Democratic obstructionism, sitting on over 100 nominees and appointments made by Gov. Chris Christie in 2010.

Even a recent push by Democrats to move on some of the renominated applicants – like Port Authority board chairman David Samson and N.J. Turnpike Authority board member Ronald Gravino – have been either deadline-pushing hand-overs or horse-traded concessions.

Many of the appointments that Christie has put forward are still waiting for their day before the committee. Others made it onto the committee agenda this year, then sat for hours until the committee finally convened and decided to put their appointments back on the shelf. They haven’t appeared on an agenda since.

“You would think that he would say, ‘I’m so happy that the agenda has all these important (nominees) on it,” joked state Sen. Nick Scutari, (D-22), of Linden, who chairs the Judiciary Committee. “I think we’re moving at a very good pace.”

He said the pace has been quickened after the lines of communication between Scutari and the Governor’s Office were reopened last week.

“We’re trying to have a dialogue,” he said, but it’s a two-way street – not Christie’s way or the highway. “There’s gonna be some things that we’re going to advise him on and we’d like to see some action.”

Just making the agenda doesn’t guarantee confirmation, though. “These are not all slam dunks,” Scutari said. One nominee for Superior Court judge has never tried a case before a jury and an appointee to the Civil Service Commission has no background whatsoever in that subject, Scutari said.

The committee may also be hearing on an emergent candidate as well, he said.

Below are the 11 individuals scheduled for a yea-or-nea on Thursday: 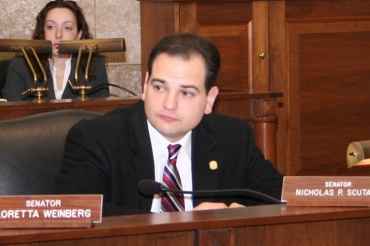