Two brothers are at the center of legislative petition drives in the City of Elizabeth as potential challengers to state Sen. Ray Lesniak (D-20) of Elizabeth.

Tony Monteiro is the former city councilman whose opposition to the budget caused law enforcement authorities to forcibly remove him from City Hall in handcuffs. His brother, Nelson Monteiro, is a former judge.

“We’ve both been approached and we’re both considering it and interested in it,” Tony Monteiro told PolitickerNJ.com.

Reidistricting will impact their decision – to a point.

“Elizabeth will more than likely be in one district,” Monteiro said. “It could remain the same with Union and Roselle; it could contain Elizabeth and part of Newark, or maybe they run us down into Linden. Any way you go, you have the entirety of Elizabeth.”

Nelson Monteiro is a former Hillside municipal judge. Tony Monteiro served eight years as a councilman. He ran for the Assembly as a Republican a decade ago, then switched back to the Democratic Party.

“I wasn’t going to let the power bosses push me out of the party,” Monteiro said.

Whether it’s him or his brother, Tony Monteiro said he knows it would be difficult to beat Lesniak.

“We’re working the phones calling local business people and getting their input and thoughts and it’s remarkable – the disconnect between the people and Ray Lesniak,” he said. “My brother and I are looking at it as a tough hill to climb. Of course, we know Ray is going to bring in Fort Knox. He’s got a fundraiser at his house next week and he’s already out there filming a TV commercial.”

An ally, former School Board President Rafael Fajardo, at least agrees with Lesniak on one thing. Fajardo also doesn’t like the floated option of lumping Elizabeth in a district with Newark.

“What would happen with a district like that is we would be trading Batista for Castro,” said the renegade political leader, presumably referring to Lesniak and Newark North Ward Democratic leader Steve Adubato. 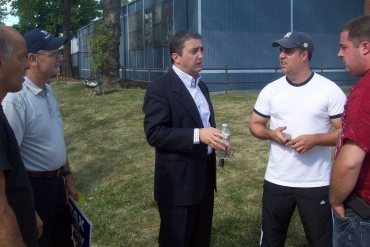