Assemblyman Paul Moriarty, (D-4), Gloucester, called on Gov. Chris Christie Wednesday to  immediately reimburse taxpayers for the costs of his “town hall meetings” because, according to Moriarty, the governor openly campaigns for Republicans to win elections.

“These are taxpayer-funded events organized and promoted by the taxpayer-funded governor’s office,” said Moriarty in a release. “If the governor sticks to public policy, that’s fine, but if the governor wants to campaign he must dip into his own wallet. He should not be wasting taxpayer dollars on his own political rallies.”

Moriarty said Christie needs to reveal how much the town hall meetings cost and then reimburse taxpayers for the expense.

At his most recent town hall meeting in Woodbridge on Tuesday, Christie told the audience that he tries not to be too partisan at such meetings, but he said it is difficult to accomplish his goals when Democrats control the Legislature.

In response to Moriarty’s demand, a spokesman for the governor said Christie is not reponsible for the questions asked at the town hall meetings.

“The Governor does not initiate political discussions at town halls; he talks about public policy and his reform agenda,” said Christie spokesman Michael Drewniak. “Audience members often ask how he will implement reforms or why they have not been implemented to date.  The Governor merely observes the reality of a Democratically controlled Legislature, its ambivalence, even outright hostility toward reform efforts, and with whom the consequences lie if necessary reforms are not passed.   We can’t separate those realities and that history from a frank and honest discussion about the urgent need to fix New Jersey’s fiscal problems.” 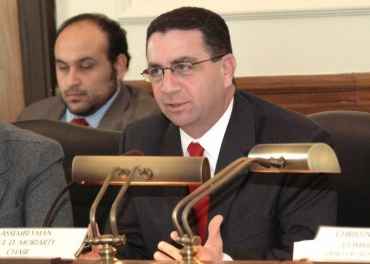